Magic Sword SNES Game Cartridge
Magic Sword was released for the SNES 1992. It was developed and published by Capcom. It was originally released for the arcades in 1990. The player will be able to use an axe, sword, or some magic. They can also save and recruit some potential allies with various character classes, with every person having their own abilities. A similar game, Black Tiger, was released back in 1987.
The game takes place inside a world that is unnamed and Drokmar, a dark lord, is threatening it. Drokmar has control of the evil crystal Black Orb that will allow him to take over the entire world. To stop this from coming true, the hero, who is known as Brave One, will need to scale a tower that is 50 floors and is also where Drokmar resides. The tower is called Dragon Keep. At the end of the game, once Drokmar is destroyed, the player will have the choice of two different endings which are destroying the evil Black Orb or taking control of the Black Orb, which turns the hero into the next dark lord.
The gameplay will consist of side scroll fighting along with platforming style elements. Only the main character is controlled by the player. The computer will control the ally that accompanies the player. The ally will follow them diligently and will only jump and attack whenever the player’s character does. One item is allowed to be carried to assist a current ally or the player themselves.
A magic meter will be present for the player. If will fill up as the player does not attack but will completely empty every time an attack is performed by the player. If the meter is blue or empty, the player will only be able to melee attack. Magic allies, like the wizard and priest, will not be able to attack during this situation. If the meter is not full but red, any ally that is magical that the player is teamed with will use a ranged attack that is magical but weak along with melee attacks. Once the meter is full, a player and an ally that is magical will use a ranged attack that is magical and strong along with melee attacks. The allies that are non magical will attack regardless of what the magic meter reads.
The health of the player will be displayed as five different HP bars. There sill be a number that is next to an HP bar that will count the amount of sets of 5 full HP bars that go beyond the original ones the game shows. This is just in case a player has accumulated &nbsp;more than 5 HP bars that are full. The player’s ally will have an HP bar that has a max of 4 HP bars. The full screen attacks are able to be performed instantly once a magic book is found or it can be demanded when the player uses an HP bar as the cost for one.
There will be 51 floors the player will fight through while playing. Eight floors will have a boss character at those specific level’s ends. This will also include the fight with Drokmar at the game’s end on floor 50. Also, there will be seven doors that are secret and will allow a player to skip levels once a maneuver is performed.
UPC: 0-13388-13004-7
Platform: SNES
Players: 1
Condition: Used
Genre: Platformer
Region: NTSC (North America)
Rating: Everyone 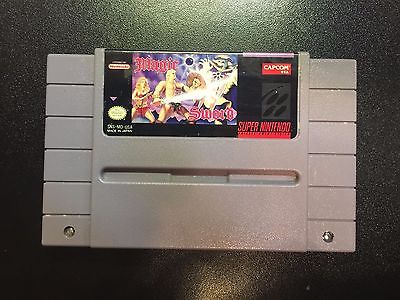