Out of this World SNES

Out of this World SNES Game Cartridge
Out of This World was released for the SNES in 1992. It was developed by Interplay Entertainment and published by Delphine Software. It was originally released in Japan in 1992 under the title Another World. The game at the time was innovative for using cinematic effects in the cut scenes and real time. The game was praised by critics and had commercial success. There were also designers and games it influenced, and inspired games like Silent Hill, Metal Gear Solid, Ico, and Flashback.
Lester Knight Chaykin, a young physicist who is a genius, is the game’s protagonist. During the game’s opening cinematic, he arrives into his underground laboratory driving his Ferrari while a thunderstorm was going on. He then starts working on an experiment with the particle accelerator to attempt to figure out what happened once the universe came about. Immediately before all the particles were able to reach their destination they were intended for, lightning struck the laboratory, interfering with the particle accelerator and causes an unpredictable fusion of particles and also an explosion. This explosion opened a space and time hole and then teleported Lester to an alien planet.
After Lester evaded some dangerous native animals, he was captured by a humanoid alien race and then taken to their prison camp. He eventually escapes with a captive alien named Buddy and both of them needed to avoid being captured while traversing through dangerous environments. While going through these environments, they battle wild creatures and alien soldiers while trying to solve the numerous puzzles to survive.
Both Lester and Buddy travel though a prison complex, the cave system, and the tower structure. During the climax of the game, Lester becomes wounded severely by an alien but Buddy was able to help him and he managed to kill the alien attacker and then escape. After they reach the tower’s top, Lester then collapses, but Buddy picks him up and they both are able to escape on a creature that looks like a dragon. They then fly off into the horizon.
The player will use the controller to control Lester and have him jump, run, attack, or perform actions that are situation specific like making a cage rock back and forth. During the game’s initial part, the player will be unarmed. They will have the capability of kicking small creatures but otherwise will be defenseless.
In a later part of the game, a pistol that shoots lasers will be acquired from a foe that has fallen. The pistol will have three capabilities. There is the standard firing mode, an ability of creating force fields for blocking enemy fire, and the charged shot that is powerful and is capable of breaking through some walls and force fields. The enemies will also have these same capabilities and the player will be required to try and make use of all three of the gun modes and the environment to overcome the enemies.
The player’s character and alien ally are not able to take any damage, therefore if hit, the game will end immediately if one of them is hit by any projectiles or comes into contact with animals or a hazard in the environment. There will be many checkpoints, however, so the player is able to restart at the checkpoint that was most recently reached. During any scene, the game will not provide clues for the player on what they need to do next. There will also be no HUD other than the oxygen bar while playing the swimming sections and no text on the screen. The characters during the game the player will meet will speak an alien language that is unintelligible.
UPC: 0-40421-82004-7
Platform: SNES
Players: 1
Condition: Used
Genre: Platformer
Region: NTSC (North America)
Rating: Everyone 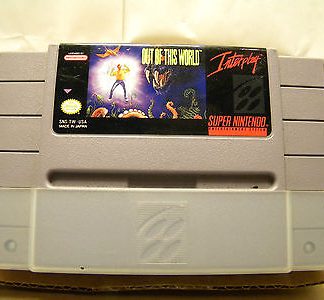