Target Renegade NES Game Cartridge
Target: Renegade was released for the NES in 1988. It was developed by Ocean Software and published by Taito. The game is Renegade’s sequel and Renegade 3 follows it. The game will be one player and center around a street fighter who is known as Renegade, seeking out to find the crime kingpin Mr. Big who is holding Renegade’s brother, Matt, hostage. The player’s character will be represented wearing jeans and a blue leather vest. The early stages will show a player outdoors, going through the level to reach a boss they will need to defeat. After defeating the boss, the player will reach the pay phone and report on their progress. The game will consist of five levels, with the NES game being similar to Double Dragon and have a variety of weapons and enemies.
The game’s cover and title screen will portray a man who is topless performing a jump kick through a glass window. The character shown on the illustration has little relation to the characters during gameplay, but the picture was used to keep up with box art of video games and the advertising during that time. The picture is actually based on Joe Lewis, who is a legend of Martial Arts.
UPC: 2-00555-70843-1
Platfrom: NES
Players: 1
Condition: Used
Genre: Fighting
Region: NTSC (North America)
Rating: Everyone 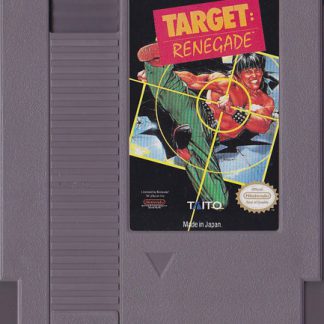