Air Fortress NES Game Cartridge
Air Fortress was released for the NES in 1989. It was developed and published by HAL Laboratory. The story is about people on planet Farmel recently gaining technology to be able to travel through space. They started to eagerly explore the galaxy and found a group of large Air Fortresses that were moving toward them. The people then find out the Fortresses act similar to interstellar locusts that consume all living things and resources in their way. The Space Federation decide to send their best fleet, being quickly destroyed by the Fortresses. As a last resort, a warrior named Hal Bailman is sent out, who has a space suit that is shielded, very strong weapons, and a small lightship so he can get into the Fortresses to destroy them inside out.
The player will infiltrate the Fortresses, with each getting progressively harder. There are two separate levels in each, which are Air Base then inside the Fortress. When getting to the Fortress, the player will fight enemies with the lightship.The gameplay during this section is a side scroller shooter. The player will have three tries to reach an Air Lock successfully that will grant access inside the Fortress. Parts from the space station and flying enemies will need to be dodged. Energy can be collected along with crash beam bullets, which is more powerful ammo with limited supply that will be able to be used while inside a Fortress. One hit will destroy a player’s ship while playing this mode, with the player respawning right where they were destroyed, assuming there are lives to spare.
While inside a Fortress, the gameplay will change to a platformer style game. The player will now have more control on where they can go. Finding the way through a Fortress is a major challenge the game offers. While navigating through the Fortress maze, the player fight off security devices, enemy robots, and beam weapon wielding spacemen. The player will then need to destroy the Fortress’s central core, then return to the ship and escape. The last part is probably the hardest since after destroying the Fortress’s central core, the Fortress will explode and there will be a small amount of time the player will have to try and escape. The exit will also not be in the exact area the player entered the maze at the beginning.
UPC: 0-40458-03607-7
Platform: NES
Players: 1
Condition: Used
Genre: Shooter
Region: NTSC (North America)
Rating: Everyone 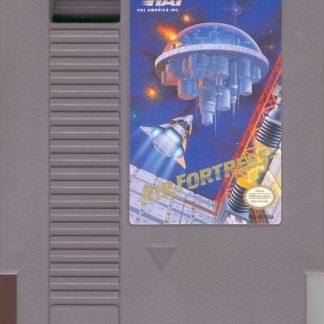