Ghostbusters 2 NES Game Cartridge
Ghostbusters II was released for the NES in 1990 with Imagineering as the developers and Activision as the publishers. The songs Higher and Higher and the main Ghostbusters theme have been synthesized to be featured in the game.
The player will take control of a ghostbuster while exploring stages that are based on the movie. The goal is to get to the museum before the time expires. Two of the levels will have the player drive the ghostbusters car. Another level has the player controlling the Statue of Liberty with the ability of shooting fireballs. The players’ ghostbuster has a cannon that has an unlimited slime shots and the player also has ghost traps. Ghostbusters II is known to be extremely difficult to beat for many reasons. The lack of a health bar and the timer limit puts a constraint on surviving. Another reason is in some of the stages, the display will scroll left, forcing fast decisions for the player. The player will also need to beat the final stage four times upon completing the game. There is also no pause feature, adding to the difficulty of the game.
UPC: 0-47875-70006-2
Platform: NES
Players: 1
Condition: Used
Genre: Platformer
Region: NTSC (North America)
Rating: Everyone 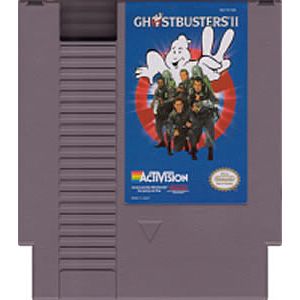