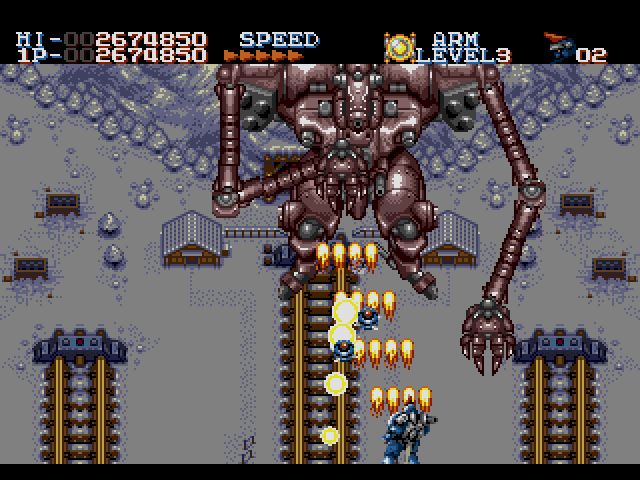 In spite of the jokes constantly made about the Sega CD’s library and it’s over reliance on FMV titles (which was true) by 1995 it managed to accrue a respectable library of titles spanning numerous genres.  Admittedly a decent number of those were Genesis ports with terrible grainy cutscenes but there were some fantastic exclusives such as the Lunar series, Soulstar, and Snatcher.  One genre that surprisingly saw a number of quality releases was the shooter, with Robo Aleste, a semi sequel to M.U.S.H.A being one of the highlights.

In the year 1543 amidst a raging war between feudal lords in Japan a massive war ship full of humanoid mecha floats ashore, armed with steam based electrical technology the nation had never seen before.  Through reverse engineering newer creations are made and the face of the war changes.  Of the eight remaining warlords Oda Nobunaga has spread his influence the furthest, sowing jealousy and the creation of an anti Oda alliance.  As Kage you are the last surviving member of Oda Nobunaga’s White Fang army and outfitted with the most powerful robotic army assembled, the Aleste.  With his lord’s honor at stake and an entire continent full of enemies waiting in the wings Kage has a long road ahead of him.

Although it’s a sequel it does so in theme only.  The story of Robo Aleste is very elaborate for a shooter, going out of its way to explain the creation of the ninja mechs and other assorted mechanical monstrosities that inhabit this ancient Japan meets sci-fi world.  The plot is advanced by frequent cut scenes in between levels as all is not what it seems among the anti Oda constituents.  While they’re a nice reward for completing each level they are largely irrelevant; if you bought Robo Aleste you came for the shooting action, something it does with aplomb.  Robo Aleste is one of the better shmups for the Sega CD and even Genesis and while there isn’t much here that required the CD add-on it’s a welcome addition to its library.

The Aleste returns with most of the same firepower from the last game.  The standard throwing knives can be once again upgraded to a frightening degree by collecting power capsules dropped by enemies.  The Blue Lightning Flash and Orange Exploding Flower return and are joined by the Green Ninja Stars and the Yellow Shadow Formation.  Each weapon occupies a particular niche making all four useful for different situations in the game and can be upgraded three times.  The shuriken are fairly powerful and cover a rotating arc in front of you.  The lightning flash pierces through enemies and walls making it effective against enemies with shields or tricky placement.  The exploding flowers cover a wide range and cause splash damage when they explode but aren’t as effective at protecting you from direct hits.  Lastly the shadow formation turns your aggressive homing devices that will seek out and destroy anything in your path, replacing the dual pods from the first game.

Speaking of the pods their formations are notably absent this go around, something that has an effect on the gameplay overall.     Experimenting with their different positional configurations was fun, especially when combined with the appropriate weapon.  However it proved a little too strong and could lead to near invulnerability, not that M.U.S.H.A didn’t try its hardest to prove otherwise.  Now the onus shifts back on the weapons themselves and learning their quirks.  The lightning is lacking in power but is highly effective in destroying mechs long before you enter their line of fire.  The shadows have a minimum range before they’ll attack so at least you have some control over them.  With the frequent weapon drops it seems as though constantly switching depending on the situation is intended.

This is one of the longer shooters on the market, topping out at 10-12 levels long.  Each stage is of varying length with some lasting a scant few minutes and come across as more of an interlude.  Others drag on a bit too long such as level three’s assault on the train line.  Kage’s path to the mastermind behind the betrayal of Nobunaga is strategic as you fly over the sea to avoid the main forces, destroy their supply lines and infiltrate their fortresses.  Each boss encounter isn’t just a mindless battle against an overly armored assailant, their piloted by generals with whom Oda and by extension you previously worked with to maintain peace, including your jealous older brother.  The story isn’t deep but does provide context for your actions and elevates the game above a lone ship facing impossible odds.

The gameplay may have seen its fair share of changes that will be loved or hated but there is no question that M.U.S.H.A is the superior game visually.  Where MUSHA had an even mix of feudal Japanese architecture combined with sci-fi elements Robo Aleste slightly downplays that part.  Don’t get me wrong there are no shortage of gigantic mechanical bosses to face but the backdrops are mostly flat and lifeless, devoid of the beautiful parallax scrolling so prevalent in the first game.  Instead the game conveys the feeling of depth through scaling enemies, just not as effectively.  The game does have its highlights; infiltrating Mouri’s citadel at night will set off the alarms, resulting in a gorgeous display of transparent search lights amid the ensuing rush of enemies.  The cut scenes are sprite based like most Sega CD games rather than cel animation but still look impressive today and there are many scattered throughout the game.  The soundtrack features a thumping array of techno beats mixed with a folk sounding music that matches the tone of the game pretty well.  The voice acting however is pretty bad, typical of that era.

Robo Aleste is the best shooter available for the Sega CD regardless of the lack of heavy competition or not.  As a follow-up to M.U.S.H.A it falls short in a few areas but makes up for it with a longer quest and more involved story.  These days Robo Aleste is priced slightly higher than you would expect but regardless of how much you pay you’ll definitely get your money’s worth.