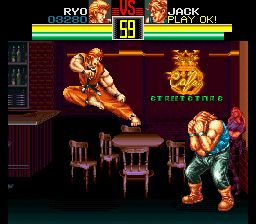 At the time of SNK’s fighting game renaissance Art of Fighting was one of its most unique series and next to World Heroes less popular.  As the next game to follow Fatal Fury and to also back in Street Fighter 2’s light it had its fans but its gameplay systems were probably a bit too far out of the norm for most to take a shine to.  Takara, who had started making a name for themself publishing the 16-bit conversions of SNK’s games turned out a pretty damn good SNES port which was surprising considering the technical gap between platforms.

Yuri Sakazaki has been kidnapped leading her older brother Ryo and his best friend Robert Garcia to hit the mean streets of Southtown in search of clues to her whereabouts.  Their search will eventually have them run afoul of the local mafia of Southtown as they uncover the mastermind behind the plot.

Art of Fighting stood out in the arcade for a number of reasons but the most important would be because of its scaling effect and large characters.  These were some of the largest fighting game sprites at the time, literally occupying ¾ of the screen when in close.  They’re so huge in fact that the game has to zoom out to keep everything in perspective.  In the arcade it was an eye catching effect, one that would later be used in Samurai Shodown as well.  Surprisingly the SNES port keeps the effect by slightly reducing the size of the characters but it’s all there although it isn’t as smooth as the arcade.  The fact that they were even able to squeeze the game relatively intact for the SNES was a god damn miracle in and of itself.

The game’s single player mode is limited by the fact that you can only play as Ryo or Robert which makes sense.  It’s not much of a choice when it comes down to it as they both play identically and even share the same moves.  The game tries to offer flimsy reasons as to why you have to kick in the teeth of each member of the cast but let’s be real, no one cares.  I wouldn’t exactly call it an extensive story mode but there were cut scenes in between matches that this port lacks although the inane pre fight dialogue has been kept.

While the single player is constrained to two choices multiplayer gives access to the entire roster plus the two bosses via code.  The variety is appreciated but I’ll be honest, this is one of the most generic casts of pugilists assembled.  Ryo and Robert fulfill the Ken and Ryu archetype.  Lee Pai Long is a Chinese version of Vega, John Crawley might as well be the love child of Arnie and Guile, and Mickey is your Balrong stand in. You know the cast wouldn’t look out of place in Double Dragon, especially Jack.  Thankfully the game brought some interesting ideas to the table to help cover up its lack of interesting characters.

In terms of gameplay AoF is not your ordinary 2d fighting game.  While all characters have special moves they’re governed by a spirit gauge that depletes when they are used.  Spirit slowly refills as a match goes on and can be replenished manually but this leaves you open to attack.  A well placed taunt will deplete your opponent’s spirit as well although the same applies to you.  Managing spirit adds an extra tactical element to the proceedings since you’re more likely to save your special moves than spam them uncontrollably.

The spirit gauge could have slowed the gameplay but Art of Fighting added a few mechanics that have since become standardized within the genre.  Dashing helps to keep the pressure up on players who try to turtle while back dashes enable quick escapes.  Wall jumping allowed you to close the gap relatively quickly and when you’re life bar dips too low desperation moves were enabled although I will say you’re a better man than me if you can pull them off.  I have my gripes with the controls; strong attacks are enabled by pressing the throw button after using punch or kick.  This limitation made sense as Neo Geo cabinets only had four buttons and here the last is used for taunting.  The SNES controller has six; they could just as easily included the option like World Heroes to map them separately.  Hell I don’t even know why there needs to be a throw button; every sensible fighting game enables them once you’ve gotten in close.

This is not a combo heavy game and in fact stringing together more than two hits in succession is an accomplishment.  Most hits result in a knockdown and in fact attacks inflict so much damage that a single three hit combo would probably end the match.  The damage from attacks in general seems off, a problem SNK had with many of their other arcade games.  Combine that with the vicious AI and you have one tough nut to crack.  Art of Fighting has the early symptoms of SNK boss syndrome as Mr. Karate is insanely cheap and will chain multiple Zanretsukens if you are knocked down at any time.

This SNES port is a more than respectable version of a solid game.  It has its fair share of gameplay innovations and frustrations but in the end Art of Fighting is still a decent game today.