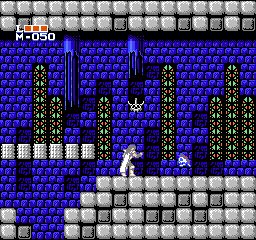 It’s a shame that Irem is mainly known for R-Type as they have crafted a number of little known classics over the years such as Metal Storm and Ninja Baseball Bat Man (look it up its awesome!).  While they were partly responsible for unleashing Spelunker on the world everyone has their skeletons in the closet.  They also have a number of hidden gems unreleased in the US and in this case it’s the Castlevania inspired Holy Diver.

Randy is the Holy Diver, whatever that is since the game never tells you.  Randy is tasked with retrieving the five emblem seals belonging to the King Crimson Family in order to send the evil Black Slayer to another dimension.  As a Jo Jo’s Bizarre Adventure fan all of these musical references sound a little too much like a coincidence but I’ll give the game the benefit of the doubt.

There have been many Castlevania clones over the years but the majority of them have been terrible.  Games like 8 Eyes and Earnest Evans might share a similar look but were sorely lacking in gameplay.  Holy Diver avoids many of the pitfalls those games fell into while bringing a few distinctions of its own.  Initially scheduled for an American release it was cancelled with no reason given after a few previews.  Since the game has no in game story events and what little text is in English anyone can play this gem without fear of the language barrier.

Randy resembles Simon or Trevor during their NES outings with the addition of a cape.  Honestly it’s pretty shameless just how closely Holy Diver resembles Konami’s classic series.  But there are enough gameplay features to separate both.  You’ll find no whips or any other melee weapons here; Randy has an infinite supply of fireballs that while short in range can at least be fired upwards as well.  There actually aren’t any secondary weapons; instead you’ll gain a new spell after each level.

Magic plays a huge role in whether or not you’ll last long enough to actually complete the game.  The default fireball attack is adequate in most situations but there are times you’ll need to take out stronger enemies from a distance.  Spells such as twin fire and breaker can accomplish this and are much more powerful.  Some spells have secondary functions such as blizzard, which will freeze all enemies in place as well as water and lava.  The screen clearing thunder and overdrive will see less use due to their cost but will save your life in a pinch.  For the first three levels you’ll have to be conservative with magic since it’s so limited; the crystals that restore MP only do so in increments of 2 which is flat out insulting.  But by level four you can afford to be a bit reckless tossing spells around since your max will be so high.

Aside from the standard life and magic restoring items there are a few permanent items you’ll want to go out of your way and find as they are crucial to the quest.  The bracelet will allow you to smash blocks while the wing boots increase the height and range of your jumps.  Probably the most important is the wizard staff, which chops the cost of spells in half.  Trust me it’s worth losing however many lives it takes to find it.  The last upgrade is a new cape that reduces damage received in half.  They really should have placed it earlier in the game rather than prior to the final level if you ask me but such is the way of life (or evil game designers).

While it might sound as though Holy Diver is fairer handed than the Castlevania series that couldn’t be farther from the truth.  Unfortunately if you hated some of the worst excesses Castlevania is known for they make an unwelcome appearance in this game as well.  Prepare to fall into pits as you get knocked back by enemies, conveniently unfair enemy placement, as well as ridiculous damage.  As early as the second level the difficulty sees a huge spike.  The Holy Diver equivalent of the Medusa heads would be the bats that infest nearly every level.  These bastards fire a triple projectile in a downward arc and are only vulnerable when moving back and forth.  Did I mention they’re nearly always placed in front of bottomless pits?

If you can survive the perils of each level you’ll then have to somehow manage to defeat the boss.  Remember how near impossible Frankenstein and Igor along with the Grim Reaper in the original Castlevania seemed?  Now imagine if every boss were on the same level.  That is Holy Diver.  The twin plant….thingies will confound you with their random disappearing act but the one that nearly broke me would be the level 4 boss.  This floating column of eyes is fought on a series of levitating platforms with one wrong hit sending you to your doom.  As bad as Castlevania might have been they at least showed restraint in this regard.  Dying at least lets you start where you left off somewhat and there are infinite continues, if that helps.  It almost feels as though this were designed like an arcade game to drain your pockets of their quarters but released as a console title.

Due to the game’s difficulty Holy Diver ranks somewhere below Castlevania 3 in terms of quality.  Had the game been more evenly tuned it might have given Castlevania 3 a run for its money in terms of production values and overall quality.  As it is only the most hardcore gamers will find it within themselves to return to an era in which games would kick your ass and call you a pussy for complaining.