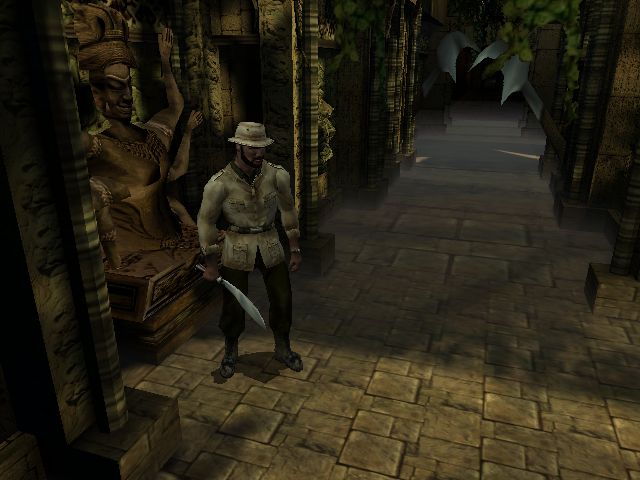 Eternal Darkness was a long time in coming, having started life on the Nintendo 64 before moving to the GameCube sometime before its release.  As one of the N64’s last games it had a large amount of hype behind it; there were very few if any adventure games half as ambitious that were even attempted for the platform and as the previews mounted it became obvious it would be something special.  The decision to move it to the GameCube wasn’t a popular one at first but the subsequent upgrade in graphics and gameplay quieted the storm.  Unfortunately ED did not land with the impact it should have but it remains a quality adventure to this day with some unique gameplay points that have not been replicated since.

The plot of Eternal Darkness will eventually take players on a ride through numerous periods in history with over a dozen characters as players unravel the mystery of the three Elder Gods battling for supremacy with humanity caught in the middle.  The plot is centered on Alexandra Roivas, who has just inherited her grandfather’s mansion after he is brutally murdered.  With little help from the police Alexandra explores the mansion for clues to his death and instead discovers his research into the Tome of Eternal Darkness and takes up the fight in his stead.

The story covers one of the largest spans of time, dating as far back as 26 BC.  Although Alexandra is the central figure for the most part she merely serves as a bridge between the various characters you’ll play as.  From a Roman centurion to an Italian architect and even an archaeologist and firefighter in near modern times the well-crafted story manages to bring together all of these disparate character’s exploits together beautifully as each has a role to play in the game’s eventual outcome.  Although you’ll only spend a brief time with them you’ll become invested in their eventual fate; not every story has a happy ending but it all serves the greater good.

13 characters with their own play mechanics could easily have been a large clusterfuck but they all have a solid base to start from.  The controls are solid, none of that tank style movement so prevalent in the genre.  All characters can target individual body parts of enemies which is an effective way to prevent damage.  This is one of the most crucial skills to master in the game and is mandatory for progress.  Taking off an enemy’s head will render them a non-threat since they’ll flail about helpless and might even attack their comrades.  Most of the basic fodder will be encountered in groups and this tactic will alleviate some of the stress.  Disarming larger enemies such as Horrors will make your life easier as they have a long reach.  Some have specific weak points that must be targeted and with one particular character’s ability to perform autopsies you can do so easily.  The targeting isn’t perfect unfortunately; as the targets move around it becomes harder to focus on the same point as it jumps around relative to their position which is realistic but is frustrating to deal with.

There’s a large assortment of weapons available, possibly one of the biggest collections assembled to that point.  All armaments are true to their respective era meaning you’ll wield numerous swords, blades, and guns and adapt to their individual quirks.  Maximillian’s flint lock pistol can only fire one shot before reloading which is a laborious process.  Ellia’s blowgun poisons enemies which forces you to dodge their advances while it takes effect.  The size of the weapons will also affect the player in numerous ways.  A smaller characters such as Anthony will move and swing slower while wielding a two hand sword for instance.  You’ll have to pay attention to the environment when in combat as walls can obstruct your swings.  There are occasional collision issues where attacks that clearly connected will not register and a bigger issue, they’ll fall to the ground and clip the background making it impossible to finish them off and restore sanity.

The magic system might seem complex at first but is simple in practice.  Spells are learned from scrolls and can be cast in a 3, 5, or 7 point array, increasing its power.  In addition each spell can be cast in one of three alignments, Red (Chatturga), Blue (Mantorok), or Green (Xel’lotath).  There’s a rock, paper, scissors style system in place as to which colors are weak or strong against the other, a fact you’ll have to take advantage at numerous points.  The spells run the gamut from enchanting items to self-defense and healing and most importantly once a spell is learned every following protagonist has access to it.  Magic is a bit game breaking as it refills over time, meaning there is no penalty for staying put and letting it recharge in order to refill health and sanity.

Perhaps Eternal Darkness’s most famous aspect is its sanity system.  As you encounter the various demonic denizens in each chapter your sanity will decrease when spotted.  The amount varies depending on the hero; someone like Pious Augustus who is a battle hardened veteran will lose very little as he is fearless.  Ellia and Paul Luther have very short sanity bars and will succumb to madness quicker.  By finishing off downed enemies you can restore sanity or use magic.  There are repercussions for letting it drop such as increased damage from enemies and health dropping.

Eventually despite your best efforts that meter will deplete and at that point you’ll start to lose your mind, literally.  There are somewhere around 50 effects, some so subtle you won’t notice it.  Sometimes blood will drip from the ceiling, others a bug will land on your screen (I guarantee you’ll think it’s real!).  The more unnerving are the chants or random door banging.  It gets more manic than that however; the most extreme effects will cause you to explode when casting spells or disregard all player control.  It’s all in fun as you’ll be taken back to the last room you’ve entered in the most extreme circumstances.  I’m purposely not going into detail as its better to experience them yourself.

At its release Eternal Darkness was a pretty game but the years have only highlighted its flaws.  The character models still show their N64 roots at times with low poly counts and blurry textures.  The animation is excellent with all characters switching it up depending on the weapon equipped and level of health.  The frame rate never drops even in the most hectic situations with as many as 7 or eight zombies bum rushing you.  The indoor environments fare better with incredible lighting and shadow effects complementing the intricate architecture.  There’s some light bump mapping used to make the smaller background details pop, giving the game a stronger look than you would at first expect.  It’s apparent some levels had more work done to bring them up to par than others; whether that was a conscious decision or time constraint we’ll never know.

The sound design is all around excellent with a sweeping score that is both haunting and melodic.  The sound effects  such as banging doors, footsteps, and demons wailing will have you on edge at all times, especially once your sanity dips below the halfway mark.  The voice acting is especially strong overall with no weak performances to speak of.  There is some repetitive dialogue that is shared between protagonists; most notably the nervous chatter of insanity but it doesn’t mar the strong sound design at all.

Eternal Darkness will last somewhere around 20 hours for first time gamers and with its unique gameplay and excellent story is one of the best action/adventure games of that era that has held up to this day.  You can find copies of Eternal Darkness dirt cheap so there’s no reason not to experience one of the most unique gaming experiences to date.