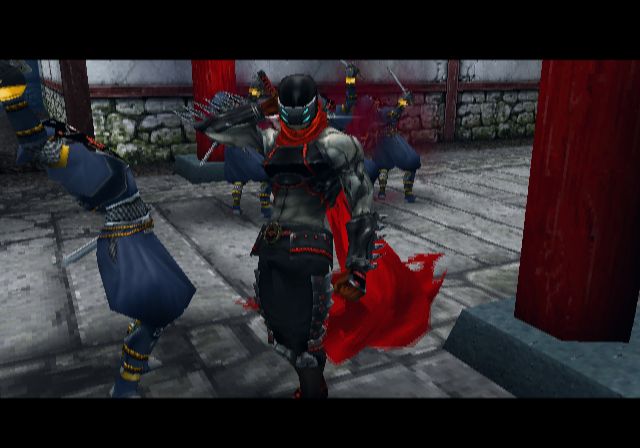 In the inevitable transition to 3d during the PlayStation era many beloved classic franchises either went into hibernation or suffered immensely as the technology/designer’s level of skill were not up to the task of accurately representing their gameplay.  For every Super Mario 64 there was two or three Contra Legacy of Wars or Sonic 3d Blasts.  When Shinobi Legions failed to catch on Joe Musashi and company were added to the pile until 2002 when a group of wise designers within Sega decided he was ripe for a comeback.

Shinobi stars Hotsuma, a new ninja within the Oboro clan.  While Joe Musashi is missed it won’t take long before you taking a liking to this new badass.  In terms of his feel and skill set Hotsuma ranks up there with Alucard in Symphony of the Night.  There’s a level of fluid grace to all of his movements seldom seen in gaming, making the simple act of running in an environment a joy.  The ability to run along nearly every surface really opens up the levels in terms of exploration.  The series infamous double jump returns although it isn’t as much of a pain in the ass to activate.  The shuriken also appear but are now used to merely stun enemies to allow you to get in closer with your sword.

Two of the most important gameplay mechanics added to the game are the stealth dash and Tate kills.  The stealth dash is an insanely cool technique that allows you to quickly move in a designated direction so swiftly that it leaves an after image behind.  This is probably the most important technique to master as it allows you to slip behind enemies, break through defenses and also becomes critical to the later platforming sequences.  I liken it to wall jumping in Ninja Gaiden; you won’t get far without it and it just looks so god damn cool.

Tate kills reward you for quickly stringing together multiple chain kills using the stealth dash with a brief cut scene as the enemies simultaneously die in a shower of blood while Hotsuma poses.  After the first kill has been you have a two or three second window to perform another to keep the chain going.  Aside from looking cool it generates extra souls to feed the sword Akujiki.  Early on in the game the sword awakens and will drain Hotsuma’s life if he doesn’t constantly kill to feed it.  Tate kills are the fastest method to prevent this and a further incentive to keep it sated is the increased damage with a full life bar.

As you can see the game is armed with a raft of features that make combat and traversal interesting but falls apart when it comes to level design.  Most levels follow a linear path filled with repeated architecture and enemies.  Each environment is fairly small and doesn’t leave much room for you to use some of the more interesting mechanics such as wall running.  The game is at its best when it presents you with opportunities to use your full skill set, such as executing repeated stealth dashes to cross long gaps or chain running multiple walls.  These moments are damn near picturesque when executed properly and it’s a damn shame there aren’t more of them.  A lot of this stems from the game’s Dreamcast roots; by keeping the levels small they could keep the frame rate high as groups of enemies swoop in for the attack.

Combat suffers from similar issues as the level design.  In spite of the various techniques available it isn’t until the second half of the game that you are presented with enemies that actually put up a fight.  Fighting the same zombie ninjas and dogs that are more apt to stare at you than attack becomes repetitive fast.  Contrast this with the modern Ninja Gaiden games that do an excellent job of marrying its play mechanics with suitable challenges to use them; almost any encounter can lead to death if you aren’t paying attention in those games.

That’s not to say the game isn’t challenging but mostly it’s for the wrong reasons.  All eight levels are broken down into two sections and a boss, with each lasting up to 15 minutes.  Unfortunately there are no check points, requiring you to more than likely play through each multiple times.  If the level design were more interesting it wouldn’t be such a chore but running down the same hallway 8 times per level gets old fast.  Late in the game you’ll encounter foes that require you to break their guard using a Tate kill, a feat that becomes increasingly difficult when 8-10 of the bastards swarm like killer bees.  Most of the bosses also have this requirement, with lesser adds spawning to give you chance to build up your attack power.

The bosses are the highlight of the entire package and are a throwback to prior games in the series.  Deducing their attack pattern and pulling off a near perfect kill for a high rank is a fun challenge along the lines of Devil May Cry.  Shirogane and Akagane present an interesting challenge in terms of prioritization while the four armed Buddha statue is a lightning spewing beast.  Keeping Akujiki at full power is the key to surviving these encounters although I will say that if you can defeat the final boss without tearing your hair out or cheating you are truly a god amongst men.

Shinobi certainly didn’t win awards for its graphics at release and it’s only gotten worse as the years have passed. The art direction is solid; Hotsuma is well designed as a modern day ninja with some trace elements of the past.  His scarf is insanely pretty to watch as it trails your movements and the destroyed Tokyo streets and various temples all have a unique look but the cut and paste environments ruin the illusion.  Most character models have low polygon counts that are noticeable at times although later bosses buck that trend.  The sacrifice in detail allows the game to run at a high frame rate which you’ll notice immediately as the controls are ultra-responsive.  The soundtrack is excellent all around and continues the series musical legacy.

Though it stumbles at times Shinobi is a solid reimagining of the series.  There are a ton of extras, from art work to 3 more playable characters.  If you stick with it you’ll be rewarded with a challenging and long quest that will truly test your skills while staying true to the series foundation.