Excitebike NES Game Cartridge
Excitebike was created by Nintendo and made its debut in 1984 in Japan and was a launch game in 1985 for the Nintendo Entertainment System. It’s a motocross racing game and has had a sequel for the Nintendo 64 called Excitebike 64, along with many spiritual sequels such as Excite Truck. The Nintendo 3DS also had a remake for it’s 3D Classics, which the game can be played in a 3D format.
There are three modes to choose to play in. Selection A has the player race by himself. Selection B has CPU’s with the player, and they will act as obstacles. Hitting a CPU from behind will make the player fall from the bike, and if the CPU does the same to the player, they will also fall. The goal of the game is to get at least third in the first race to make it to the championship race. The times posted on the walls of the stadium are the times the player wants to beat for first, and for third the time is on the bottom left corner of the screen. In every race, eight seconds faster than third is the fastest time. If the player beats that time, they see a message that says It’s a new record. The player is then awarded extra points for beating the record time.
The motorcycle is controlled vertically on the D-pad. The A button accelerates your bike, and B is a turbo. While using the turbo, it causes the temperature of the motorcycle to increase, which is located at the bottom middle of the screen that says TEMP. If the player overheats, the bike will stop and have to cool down before it can move again. Arrows located on the tracks will instantly cool down the motorcycle if driven over to keep your turbo going.
While jumping over ramps, the placement of the motorcycle can be changed with left and right on the D-pad. Right will lower the front of the bike, and right will raise the front of the bike. You can do a wheelie on the ground this way or change the position of the bike in the air to make sure you have a smooth landing. Whenever the player is knocked down, they can repeatedly push the A button to run to the bike faster.
There is also a Design Mode, which allows you to make your own track. You can choose different obstacles of different sizes to place on the track. The amount of laps to finish the race can also be modified along with where the lap ends. You can then choose either modes A or B to race on the track you have created.
UPC:7-52492-14169-2
Platform: NES
Players: 1-2
Condition: Used
Genre: Racing
Region: NTSC (North America)
Rating: Everyone 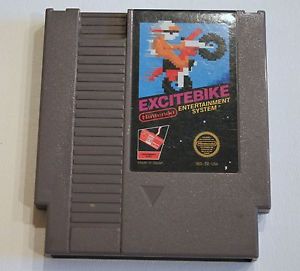