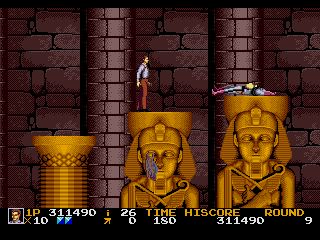 My first experience with the Rolling Thunder series came with the unlicensed port of the first game on the NES.  That black cartridge was weird as hell but the game itself was even stranger, with hooded enemies that looked like members of the Ku Klux Klan.   While it wasn’t the greatest game in the world it was enjoyable so when I heard about a sequel I had high expectations and amazingly the game surpassed them.

Rolling Thunder 2 was released in arcades in 1990 with a Genesis port the following year.  Moving the setting from the retro 60s intrigue of the original has given the series a futuristic makeover.  The Geldra Organization returns with plans to wipe out several satellites around the world, interrupting global communication in the process. Agents Leila and Albatross are on the case in one or two-player coop.  Every facet of the series has been given a facelift, creating an enjoyable run and gun shooter in the traditional mold.

The action is heavy but luckily both agents have access to a number of weapons to even the odds.  A machine gun, flame thrower, and cluster bomb are yours for the taking with limited ammo for each.  The limited ammo for all weapons will temper your urge to go on a wild killing spree; run out and you’re left with a slow one shot at a time pistol that spells instant death if it comes down to that.  That resource management is a bit odd in an action game but within the confines of the Rolling Thunder series works well.

Although there is a healthy dose of action, labeling Rolling Thunder 2 as a strict run and gun shoot em up might be a bit of a misnomer.  The Rolling Thunder series is famous for featuring equal parts platforming and that aspect has been ratcheted up for this series.  The terrain is far more varied and the backgrounds more interactive, with many more doors to hide in and passageways to duck into to avoid bullets.  The first game was a bit simple in this regard and the variety is undeniably a welcome change of pace.

The Geldra goons have increased in diversity and employ new tactics to kill you.  They now swarm you in greater numbers and in different combinations.  You’ll have very few moments of tranquility since they are relentless and their attack patterns are more unpredictable.  The bastards aren’t afraid to duck behind the same cover you employ to avoid you and chuck grenades in any arc necessary to get you.

The challenge is definitely high and isn’t helped by the fact that you can’t jump and shoot.  It sounds stupid and minor but once you start to play you’ll see just how inconvenient it is. There are far too many instances of enemies placed in unfair positions you can’t reach but they have no such issue.  The boss battles are the perfect examples of this.  It doesn’t break the game but is definitely a pain in the ass because these situations occur frequently.

This remains a pretty good action game despite its faults.  Although it isn’t a large step over the original arcade game in graphics it’s still decently pretty.  The Genesis port adds a few more levels over the arcade game and a few cutscenes for a more complete experience.  I recommend this after you are finished with the Gunstars and Shinobis of the world.