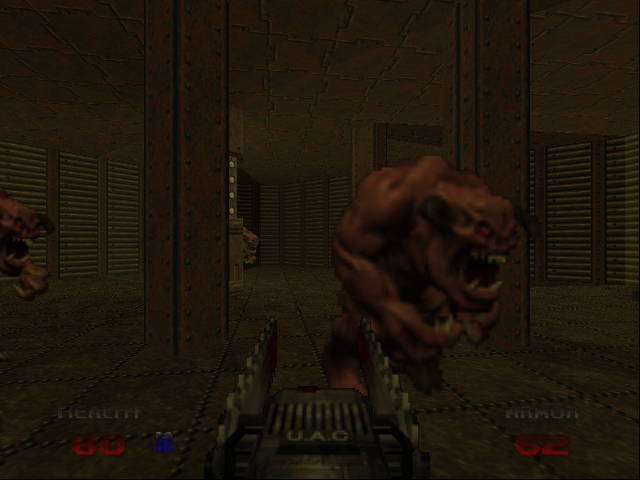 When the inevitable move to 3d gaming came certain genres benefited the most.  Racing games and fighting games in particular made the transition extremely well but above all others came first person shooters.  Prior to 1996 all fps were created using different sprite scaling methods to create 3d environments and it’s a testament to ID’s coding skill that their engine was so damn smooth.  The N64 version of Doom would finally use true 3d to bring the game up to modern standards but for everything that was gained something else was lost in translation.

All is not well in the world of Doom.  Rather than a hero’s welcome the lone Space Marine who survived finds out that there were still a few demons left.  Nuclear bombardment is used to eliminate the remaining forces of hell but it doesn’t work and even worse the surviving demons begin resurrecting their brethren.  Since you were so successful in the first run you are sent back in to turn the tide.

Doom is probably one of the most frequently ported games of all time.  Nearly every console that could run the game saw a version of it in some fashion and some that probably shouldn’t were thrown in the mix as well.  While some of these ports turned out better than others they were all flawed in some fashion.  Since Doom 64 is considered a sequel it sidesteps a lot of the problems that plagued some of the prior ports.  As a single player game this is probably the best version of Doom next to the PC game but if you like multi-player you’ll have to find your thrills elsewhere.

The strongest aspect of Doom has always been its atmosphere and its level design and in these departments Doom 64 excels.  The object of every level is still the same: find all three colored key cards and reach the exit.  Doom is a remarkably streamlined experience compared to most other first person shooters and that works in its favor. The auto aim removes the need to contort your fingers trying to hold a button to look up or down.  The default control scheme is more than serviceable  and will keep you killing demons at a fast clip.

The move to true 3d has impacted the look and complexity of the environments considerably.  Since the levels aren’t flat planes scaled up rooms can now be stacked on top of each other.  There are far more moving parts in each level along with scripted events to facilitate them.  You never know what to expect whenever a switch is pressed since hidden rooms will become available, new enemies might appear, etc.  The levels are massive in size, with some taking upwards of 20 minutes to complete and that’s not even taking into consideration the secrets scattered about.

There’s an extensive use of colored lighting in the game that serves to heighten the tension as you move about.  Doom has always been a scary game and this version’s ambient sounds and music will always keep you on edge.  It says a lot about a game when you’re scared to hit a switch for fear of how the level will change behind you.  Suddenly that health pack you skipped at the beginning of the level is worth the trip after you’ve had your face caved in by a hell knight.  While the decision to keep the enemies sprite based was questioned in practice the sheer number of enemies the game can pump out at once wasn’t.  This isn’t the type of game where you seek them out; you pray to God they don’t find you.

While it does advance Doom in several ways Doom 64 was still behind the times and brought a few new problems to bear.  By default the game is exceedingly dark and despite what you may think it’s more of a hindrance than atmospheric.  Doom 64’s “new” enemies are simply transparent versions of the main antagonists that combined with the overly dark environs can spell many cheap deaths.  Speaking of enemies, the arch-vile, spider demon & revenant are missing.  Personally I’d trade the cheesy transparent enemies for these 4 to better increase the enemy variety.

Perhaps the the most glaring omission is multi-player.  While the single player in Doom had its moments it was Death Match that made it a phenomenon (well that and the shareware model). Honestly there’s no excuse, the N64 was the premier multi-player console of that generation.  Without multi-player the game is forced to rely on its campaign and despite the added bells and whistles this is still another version of Doom.  Games like Turok (in spite of the fog) and Quake were moving the genre forward and you can only polish an old game so much.

Even to this day Doom 64 is an amazing looking game.  The alien architecture has never looked better and seeing the levels transform as massive pistons and pillars rise or recede is great.  Mip mapping has been used to eliminate pixilation giving the game a clean look.  But most of all the lighting has been given a complete overhaul and looks fantastic.  Colored lighting and shadows permeate every inch of the levels and the effect is striking.  The enemy sprites have been slightly redesigned and are higher res than before but are still recognizable.  The lack of updated animation to go along with their anti-aliased look does stick out like a sore thumb however.

Ultimately it comes down to how much you still like Doom.  At 32 levels long you’re certainly getting your money’s worth as some levels can take up to 20 minutes to complete.  The lack of multi-player kills the replay value and at this point the advancements to the genre in the years since can’t be ignored. In the end next to the PC release this is the best version of Doom, for better or worse.