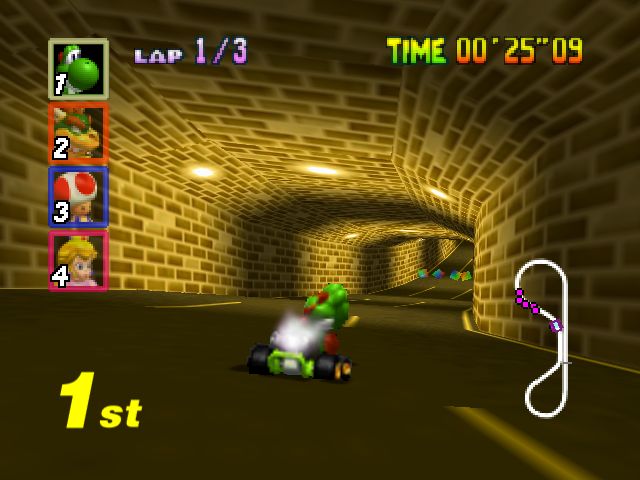 The early days of the N64 can be summed up in 1 word: waiting.  As third parties ran screaming from cartridges and Nintendo’s hefty license fees not only were releases few and far between but constantly delayed as well.  As someone who lived through that period it was infuriating, let me tell you.  The games more often than not were worth the wait, many of them achieving classic status but its not an exaggeration to say you could add 4-6 months to any release date and it would be accurate.  With nothing else new to keep us occupied we had no choice but to turn to multiplayer, which the N64 excelled at.  Mario Kart 64 was one of the earliest 4 player games on the system and would be a main stay in N64 consoles years after release.

Mario Kart 64 was released in February 1997 for the US with Europe getting hosed as usual and forced to wait until June.  The first major release after the system’s record breaking holiday season, it benefited from having no competition while also largely meeting gamers’ expectations.  A direct sequel to the SNES game, Mario Kart 64 benefited from the move to 3d in terms of track design, with large hills, pits, and walls now possible instead of using sprite trickery to fake it.

The advances in track design would also extend to the riotous multiplayer mode, with more complex battle arenas that offered unique opportunities to ambush fellow players and quickly escape.  Despite all of these advances not every element of the game was met with favoritism by players.

Four gameplay modes are available: Mario GP, Time Trial, Vs. and Battle.  Time Trial and Vs. are both self explanatory Grand Prix is divided into 4 Cups with 4 tracks each.  The different CC classes (50, 100, & 150) correspond to difficulty, as you and you’re opponents increase in speed and aggressiveness.  Unlike most racing games, all of the tracks are available right from the start.  16 Tracks was a massive amount considering the majority of racing games during that period only had 3-5 at most if you were lucky.  The 8 characters available are rated in 3 categories although the game never explicitly states it.

A host of new items were added, many of which would go on to become staples of the series.   Turtle shells now have a blue variant which seeks out the rider in first place.  In addition you can gain 3 red or green shells that rotate like a shield and can be launched at your discretion.  The ghost will steal a power-up from the nearest opponent, the lightning bolt will shrink everyone but you for easy squashing, and a new multi use boost mushroom round out the list.  As useful as these are in single player it’s obvious from the beginning they were designed with multiplayer in mind and this is where Mario Kart 64 shines.

Plug in 4 controllers and the game takes on a whole new life.   2 players can go through GP mode together but that’s not where the meat of the game lies.  The battle mode is what made late night college parties a daily occurrence.  The 4 battle arenas truly take advantage of the jump into 3d with a ridiculous number of holes and side rooms to duck and cover in the heat of the moment.

The new items added to the game truly shine here and create legendary moments, such as using the ghost to steal a red turtle shell at the last moment before losing and turning the tables.  Vs. is available for up to 4 players but there are no computer controlled cars disappointingly.  Bottom line, you play multiplayer for the battle mode.  It’s fortunate that it turned out so well as the single player is truly lacking.

Be prepared to have someone on your ass at all times.  It really is not fun to drive perfectly and

yet the computer is 2 paces behind without missing a step.

The problems with the single player mode largely stem from Nintendo’s efforts to make it more engaging.  The game is largely focused on weapons with far more item boxes littering the tracks.   The issues stem from the way it’s balanced.  Lower ranked players receive the better items while those in first or second are shafted with the pathetic banana more often than not.  But this takes a backseat to the biggest offender, the rubberband AI.  Not since R.C. Pro AM have I experienced AI so cheap.  The AI aggressively speeds up as soon as you are in first, to the point where you will never have a comfortable lead at any point.  Crank it up to 100 or 150cc and it borders on retarded.

Even after you’ve mastered advanced techniques such as sliding and mini turbo boosting every race is a literal photo finish.  Just to give you an example:  In Wario Stadium there is a shortcut at the beginning that will dump you in the last 3rd of the track.  I can guarantee by the time you begin the second lap the AI will be right behind you like a rabid dog.  Some might say it makes every race visceral but I would say they have a hole in their heads.  If I’m running a perfect line, sliding into every turn with machine like precision I should reap the rewards, not have the computer receive a miracle bullshit speed boost to keep up.  It ultimately makes the single player mode feel hollow as you’ll never feel as though your skills make any difference.

The multiplayer still holds up but the single player is just as disappointing now as it was then.  My recommendation still stands: play this for the multiplayer thrills and Diddy Kong Racing for single player.  It would have been awesome to have both in one retro package but sometimes you can’t have everything.