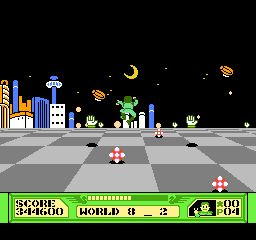 To be frank I don’t know if I actually like 3-D World Runner or hate its guts.  It’s that divisive.  In the time before Final Fantasy Square tried their hand at many genres with games like Rad Racer and King’s Knight.  3-D World Runner could be billed as a failed experiment, at least in the US but the exact reasons why need to be categorized first.

The only “plot” in World Runner is that you are the aptly named World Runner on a mission to free numerous planets in the solar system from the Serpent Beasts.  Noted for its optional 3d mode and the inclusion of glasses to experience the effect, as a game it offers a lot to prospective gamers but fails in its execution.  The ……….steep doesn’t really get the point across, difficulty is also a detriment as the game will ask too much of you too soon.

As a forward scrolling action game 3-D World Runner is similar in some ways to Sega’s Space Harrier.  The primary feature of World Runner is its platforming.  You can leap the height of the screen and for great distances and you’ll need to as well.  The few powerups gained from smashing into pillars are wholly unnecessary because you spend the majority of the time jumping from one ledge to the next.  A potion will give you one hit before death, the missile lets you destroy enemies and unlike Mario, mushrooms will kill you.  There are hearts for extra lives but those are rare; same with the atomic invincibility.  Most enemies serve as filler you can and should easily avoid, leaving you plenty of time to learn the nuances of controlling your jumps.

The levels are all split into multiple segments with a timer.  You are always moving forward and can control your speed to an extent which becomes mandatory in short order.  The numerous canyons need to be navigated carefully and you’ll only have a split second to decide if you should slow your descent or push forward to see if you can make it.  Nearly every level adds some new element to this, such as the hands that will follow you and slap you down if you aren’t on the right path or springs for greater distance.  Towards the end of the game you’ll be called on to use every single trick you’ve learned just to reach the boss of each level.  It’s definitely not a game for amateurs but that is part of the problem.

There’s nothing wrong with a game being hard so long as it’s fair, however 3-D World Runner does not fall into that category.  Many of the elements introduced crop up suddenly; as an example in World 6 right from the start you have to learn how to jump on the same pillars you’ve been running into to progress.  You have no opportunity to practice, its do or die.  Hell as early as World 3 it exhibits some of this, those springs you’ve just been introduced to?  Not only do you have to control your speed in midair to land on them properly you also have to change direction midair numerous times as well.  The difficulty curve rises too quickly for my taste.  If you can actually make it to the end you are truly a ninja gamer like I am and it’s something to legitimately be proud of.

The 3-D mode is a bit crude by today’s standards but back in 87 it was amazing.  Granted it adds nothing to the game but it was a cool extra.  What is still impressive is the game’s smooth scrolling.  Using the same technique employed by Sega and Nintendo the game’s world scrolls at any amazing rate and never chugs.  The art direction as well, while a bit fruity, keeps the checkerboard playing field from becoming stale by introducing new hazards and obstacles.  The boss battles impress as well, with segmented Serpents that scale up to the camera and all the way in the background.  The same can’t be said of the soundtrack, with its extremely limited selection and repetitive jingles.  This is not Nobuo Uematsu at his finest.

I would only recommend this to the truly hardcore, as difficulty is too high for most to put up with.  It’s rewarding to learn the idiosyncrasies of the gameplay but will you stick around long enough to do so?  Only you can decide.