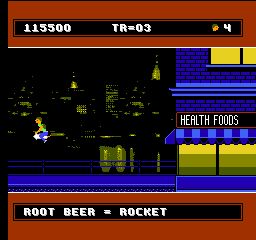 Truly unique ideas in the video game industry are few and far between so when a game comes along that is different it tends to stand out.  While the majority of these innovative games have the gameplay to back up their fresh concept some don’t always manage that feat; A Boy and his Blob happens to be one such case.

Designed by legendary creator David Crane you control the Boy as he attempts to help his companion Blobert save his home planet of Blobolonia.  More of an action puzzler than a platformer you must utilize the Blob’s numerous different forms to collect treasure needed to buy vitamins for the assault on Blobolonia.  While the gameplay is original the execution is lacking, turning what should have been an enjoyable experience into an exercise in frustration.

You are given free rein to tackle the depths of the city however you choose.  By feeding the Blob one of 15 flavored jelly beans he can assume a variety of forms to assist in navigating the caverns under the city.  From a ladder, trampoline, jack, to the more esoteric such as a bubble, blow torch or hummingbird each has a purpose with some seeing far more use than others as you tackle the challenges set forth.  There is often more than one solution to a problem, leaving you with plenty of room to experiment.  It’s extremely rewarding to stumble onto which jelly bean is needed for the problem at hand, like what to do about spider webs or how to avoid falling rocks.  Sometimes you’ll have to throw logic out the window but that basically sums up most videogames.  I mean come on it’s a videogame about a transforming blob who likes jellybeans.

While the freedom to do as you please is nice it also cripples the game in many ways.  Right from the start you aren’t given any direction as to what tasks need to be completed.  If it weren’t for the treasure count in the status bar you more than likely would never even know that’s what the main objective is.  Within the first few minutes I can guarantee you’ll wander around lost because there is nowhere to go.  While moments like these encourage you to experiment with the different jellybeans it’s very easy to kill yourself unintentionally.  The coconut can serve as an advanced scout but that only works if there is space to roll it.

The lack of any kind of direction doesn’t do the game any favors either.  I’ll use my own experience from playing the game back in the day as an example.  Eventually you’ll find all the treasure, but what then?  I assumed the game would end but nothing happened.  At some point I figured I would go back to the beginning but working your way back up is harder than going down.  Now I go to the store past the subway and I receive vitamins based on how much treasure I found but what next?  Sooner or later you’ll find the rocket bean and fly to Blobolonia.  You see where this is going?

Which also highlights another issue: this game is brutally hard.  You have 4 lives with no continues, passwords, or 1ups.  With how frequently death pays a visit it’s unfair.  The loose controls don’t help in this regard: the boy slip slides all over the place and lining up the blob is really frustrating, made even worse by how precise you need to be in most cases.  Because you have to blindly use the hole bean to drop down it isn’t fair that a good portion of the time you’ll have chosen a bad spot and fall to your death.  Even on Blobolonia there are many cases of instant death you possibly can’t avoid.  For such a short game they definitely went out of their way to make it as hard as possible but not in a good way.

Although I want to recommend A boy and his Blob because it’s so unique I can’t.  It’s far too frustrating in this day and age.  However I can recommend the Wii remake by Wayforward which features beautiful 2d graphics, a refined interface and is devoid of many of this game’s failings.