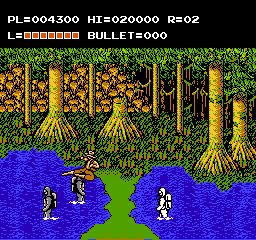 The Adventures of Bayou Billy should have been a great game. And in fact it is in its original Japanese form as Mad City. But someone decided to screw with the game’s balance for…..reasons and ruined what should have been another feather in Konami’s cap. Bayou Billy is an aggravating game not just because it is insanely difficult but because above all the frustration you can see the awesome game underneath. However it isn’t worth pursuing unless you have a cheat device on hand or just buy the Japanese version.

“Bayou” Billy Lane’s girlfriend Annabelle has been kidnapped by Godfather Gordon and now he has to brave the numerous traps put in his path to reach Gordon’s and save his girl. Let’s not dance around it, Bayou Billy is Crocodile Dundee. And for those of you too young to know who that is look it up. Whether it was done to avoid buying the official license we’ll never know but I don’t blame Konami. The character of Crocodile Dundee and the film were ripe for a video game with numerous set pieces and kind of beat em up gameplay Konami would become famous for. But the increased difficulty for the international versions of the game ruin it.

For the vast majority of the game this is a beat em up in the style of Double Dragon. Billy is armed with a punch, kick, and a jump kick and that’s about it. Small range of moves aside once you encounter your first generic enemy the problems are immediately apparent. These bastards take far too many hits to go down, have an insanely fast recovery time and will counterattack before you can move. More than likely you won’t walk away from any encounter without losing some health and unfortunately they attack in groups of two or three. Defeated enemies drop life restoring chicken regularly but trust me, it doesn’t help. If you come across a weapon hold on to it for dear life, especially the whip. It isn’t just the side scrolling sections of the game that have been touched however.

While mostly a brawler Bayou Billy spans two other genres, driving and shooting. The driving portions puts you behind the wheel of Billy’s jeep as you race to the finish before time runs out. You have less time than in the Japanese version so you have to stay at full speed to reach the exit but that isn’t realistically possible. Unfortunately the slightest touch from anything causes the car to blow up, other cars, the posts in the road and the bombs constantly dropped by fighter jets. Once again, Mad City gave you a full life bar which made it manageable. Considering you only have a few continues they’ll disappear pretty fast.

Possibly the worst of all three styles are the shooter segments. Using the NES zapper the game more or less becomes Operation Wolf as you take out enemies while the screen scrolls. The odds are stacked against you from the get go: you only have fifty bullets with ammo drops being scarce. If you run out at any point you die. These levels are long with multiple stops that unleash a wave of enemies before you can move on. Every single shot has to count if you want to reach the end level bosses with enough ammo to last. I don’t get why they decided to reduce the starting bullet count from 150 to 50 but it was just flat out stupid.

It can’t be stated enough how ridiculously hard the game is but it wasn’t always like this. Konami raised the difficulty considerably in favor of the AI for no apparent reason and it hurts the game overall. I find it hilarious that there is a practice mode that has shorter versions of each play style as if that actually helps. If you play Mad City you’ll find a far more balanced game that is in line with Konami’s other NES titles which will allow you to appreciate the craftsmanship in the game.

All of the game’s flaws are compounded by the fact that the rest of the package is still vintage Konami. The graphics are great; the sprites are large and well detailed and the backgrounds are spectacular. The game supposedly takes place in Louisiana but outside of the token swamps this could be anywhere. There is some sprite flickering at times but it is rare. Even the music is pretty catchy but the likelihood of anyone outside of those equipped with game genie’s bothering to see all of this stuff is small.

The Adventures of Bayou Billy is a rare misstep from Konami during a period where they were almost untouchable. Had the game came over in its original form we would all be singing its praises instead of tossing it in worst NES game of all time lists.