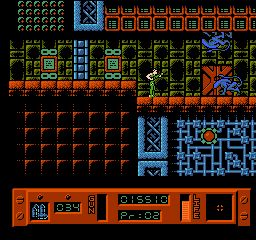 Alien 3 was a movie with a troubled production history but that didn’t stop the onslaught of video game tie-ins. Nearly every major platform at the time would receive some version of the game, with some wildly different than others. Developed by Probe Software in conjunction with LJN (any NES fan’s worst nightmare) the NES version had the potential to be a solid adventure but due to a few crippling flaws the game is far too aggravating to warrant a purchase. By 1992 with software releases drying up and higher quality titles becoming the norm Alien 3 simply could not compete against the likes of Bucky O’ Hare and Kickmaster.

Alien 3 took place on a prison planet with no weapons and a single alien. The crew and prisoners of Fiorina 161 had to come up with creative ways to try to kill the alien in lieu of any weapons which made the film more tense. Admittedly that would not have worked within the meager confines of an eight bit game so the developers simply said fuck it and took extreme creative liberties with its premise. You play as Ripley who is fully armed with a full complement of weapons and must rescue a set number of prisoners from the many aliens prowling around on each stage and find the exit. The game’s lack of care when it comes to the film’s plot could be forgiven if it were actually good but between its controls and design issues there’s no way in hell I would recommend it to anyone.

Almost immediately there are problems. Alien 3 commits the first cardinal sin of NES software; the buttons are reversed. I will forever question why anyone in their right mind would come to the conclusion that letting B jump and A shoot make sense. Nearly every other NES game copied Super Mario Brothers control scheme and you know why? Because it’s perfect. Surprisingly I will say that it doesn’t have too great of an effect on the game as any platforming that is necessary is entirely separate from combat. It will take some getting used to but most can adapt.

The game is broken up into four areas with two levels each followed by a guardian (boss) battle against a queen. Each level has a set number of prisoners that need to be rescued before the exit to the level is opened. The levels are absolutely huge, with less of a focus on combat and more on platforming and navigating around these massive mazes. Prisoners can be anywhere with the later stages of the game requiring you to loop around the entire map just to save one lone survivor. The biggest glaring flaw is the complete absence of a map; this isn’t a case where would have been a cool addition, it should have been provided. Seeing as you’ll need to replay each stage multiple times to memorize their layout to plan the best route possible it is absolutely a crime that this basic function is missing. The pathetic motion sensor is not a worthwhile substitute either since it barely works.

While there are weapons and ammo to pick up you really won’t need any of them. The few types of alien you’ll encounter seem less interested in your presence and simply move about their scripted areas and never actively seek you out. It completely takes the edge off of the scariest cinematic creatures of all time. Boss battles are similarly disappointing as the Queen has the most brain dead AI, simply pacing back and forth within the small arena these battle take place. Each conveniently has a safe zone where she can’t reach you, leaving you free to rain down bullets without fear of reprisal. Honestly it’s more advantageous to simply run past enemies and conserve ammo or take the hit to move on. Not just because it’s a waste but because you’ll need every second possible due to the clock.

Ah yes, the time limit. More so than any of its other flaws Alien 3 is completely ruined by the strict time limit. Simply put you aren’t given enough time to complete your objectives and find the exit. 4 minutes and 30 seconds is barely enough time to complete the first mission and it only gets worse from there. As early as level 2 the maps become gargantuan in size with frequent dead ends and tunnels that only serve to waste your time. Precious time that you don’t have. Of course you’ll have to draw your own maps or learn the location of the prisoners over time but the lack of any continues or passwords sure as hell doesn’t encourage that. You can set your maximum number of lives to nine in the options but that does little to alleviate the frustration of having to start from the beginning over and over.

This could have been an interesting title within the Alien universe but instead it is simply another bad LJN game to add to their list of failures. If you’re dead set on experiencing Alien 3 within through video games than go for the SNES game, it is fantastic. Avoid this at all costs.