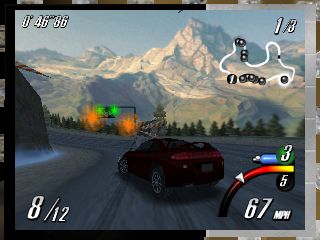 I will admit that of all the franchises to make the leap to the 32-bit generation I never expected Top Gear would be one of them. I enjoyed the 16-bit installments but never thought much of them however Kemco did an excellent job of expanding the brand on the N64 with Top Gear Rally, Top Gear Hyperbike, and my favorite of the bunch, Top Gear Overdrive. Next to World Driver Championship this is probably the best arcade style racing game for the system and one that still manages to impress with its great graphics and awesome track design.

Unlike the more sim based Top Gear Rally Overdrive is a return to the arcade style sensibility that the series started with. This is an arcade racing game in every sense of the word, with power slides and extremely high speeds at every turn. It doesn’t go all the way like RC Pro Am or Wipeout and offer weapons to smash your opposition though; nitro is the only one to make the cut. There were an onslaught of racing games in the early stages of the 3d revolution and TGO is one of the best but could have been better with less touchy controls. Even so it is incredible what Snowblind Studios accomplished with their first crack at the N64 hardware.

Players have access to only two cars at the start, with an eventual twelve more available to purchase or earn depending on your skills. While they aren’t licensed it is very obvious which real life vehicle the cars are based on. Each car comes with its own stats and can be upgraded using cash to boost handling, acceleration, and top speed. The differences in performance are only really noticeable between the starter vehicles and the high end models since every car is capable of catching serious air and pulling off the same hairpin turns. Once you’ve built up enough money to buy the more expensive vehicles the distinction in speed and handling is apparent but to the game’s detriment.

The game’s Championship mode is broken down into six seasons beginning with three tracks. Each subsequent season becomes longer, adding a new track to the mix to offer something new. The game’s six tracks are doled out pretty well, with each season gradually becoming longer. Despite only having six tracks there’s a great deal of variety. Although you will retreading the same ground each season the differing weather conditions make a tremendous difference; frigid peak during season 2 is coated in a sheet of ice that makes the controls slippery. In later seasons mirrored tracks are thrown in and while I’m not usually a fan of them they really feel different.   The track design is excellent with numerous shortcuts that can be hard to reach but produce satisfying results for the effort needed to find them.

Despite the length of the Championship mode the game is a bit light on features. Aside from championship there is only a single multiplayer mode; I still can’t believe any sane individual would release a racing game without a time trial at the very least. And even that feels half assed; you can’t even select the track and weather conditions individually, you have to go through the season menu. On the flip side you can go through the entire championship mode with up to four players, a feature that nearly every other racing game lacked. The frame rate takes a hit but remains consistently high making it a worthwhile endeavor. There are a total of 15 cars, with some of the extra secret ones being…..a bit odd. That’s all I’ll say.

The one element keeping Top Gear Overdrive from true greatness are the controls. Sadly the game’s handling cannot keep up with the speed of the higher end cars, with any attempt at precision driving usually ending up in a flailing mess. It doesn’t matter whether you’ve maxed out all of the car’s stats, once you get to the high performance vehicles they simply move too fast. True, with some foresight and deft driving skills you can compensate but it shouldn’t be this way. That’s not to say that it’s impossible to win however the overly sensitive control once you approach max speed should have been tweaked and do hold the game back to an extent.

Visually Top Gear Overdrive is spectacular. There are probably only a handful of racing games from that generation that look better which is fascinating as this was Snowblind Studios first N64 title. Their mastery over the hardware is apparent once you get a look at the trackside detail and winding paths. The cars are decked out in plenty of specular lighting that makes them really pop out and while the custom paint shop from Top Gear Rally is gone it’s not a big loss. The game also makes use of the RAM pak for a medium res mode that is only slightly smaller than the typical high resolution mode most games used it for. It’s a smart choice as it allows the game to still maintain a consistently high frame rate. As a bonus if you don’t have the RAM pak you can still run the game in this mode except letterboxed, how cool is that?

The game’s soundtrack consists of a number of rock music tracks by the band Grindstone that are good match for the proceedings. I’m not the biggest rock fan in the world however I will say that the full vocal tracks are very well done, especially considering the system’s shortcomings in this area. The compression used does leave the sound a bit muffled but to an extent there had to be a flaw somewhere for the N64 to pump out music this good.

With tighter controls and a few more modes such as a Time Trial (I can’t believe this was left out!) Top Gear Overdrive could have been an N64 classic. Instead it will have to settle for being just a great game which is nothing to sneeze at. Considering the inhuman amount of racing games plaguing the system’s small library being one of its absolute best is no small feat.