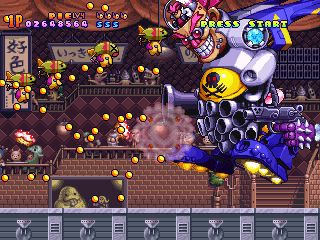 I don’t know when the American videogame industry decided that the shmup genres time had passed but I mourned its loss. I guess most of the games being 2d arcade ports of some truly brilliant games wasn’t good for the new 32-bit platforms. True, every so often a gem or two would escape Japan such as Thunder Force 5 or R-Type Delta but compared to Japan we only received scraps. We missed out on some truly exceptional games; the likes of Radiant Silvergun, Soukyugurentai, and Dodonpachi are an importer’s wet dream. One such game you’ll rarely hear about is Harmful Park, not only one of the best PlayStation shooters but possibly my favorite game in the genre. That’s no small praise either. I’ve probably played a few hundred of these games in my 34 years and so for a game like Harmful Park to leave such a strong impression speaks to its quality. The only negative I can think of is that the game isn’t more widely available.

The game’s premise is hilarious. Heartful Park was a simple amusement park until Dr. Tequila took it over to use for his nefarious ends. One of his associates wants to stop him but is too old so instead sends her two daughters to save the now Harmful Park.

While it isn’t as overt Harmful Park shares many similarities with Parodius. Both games are on the wacky side of the spectrum and nothing is sacred. Where Parodius made fun of Gradius and later other Konami games Harmful Park manages to somehow lambast anything the designers felt could be mocked; everything is fair game. Even if shooters had stayed popular in the late 90s chances are it wouldn’t have been released domestically as most publishers didn’t know what to do with these games. Its small print run makes it all the more special and whatever amount you end up paying will be rewarded.

The game equips you with its four weapons right from the start. The potato gun is your standard machine gun, rapid fire equipped and versatile. The ice cream cannon is the game’s laser equivalent, slow and piercing. The pie tosser is slower but the most powerful as the pies explode on impact. Meanwhile the jelly weapon fires homing jelly beans that are weak. Each weapon can be leveled up four times with some changing more than others. Getting up to full power is a bit of a task as power-ups are scarce.

In addition each has a secondary smart bomb function that is incredibly useful in a pinch. The ice cream cannon produces a sundae that emits a massive beam of destruction. The homing jelly beans produce a protective mold of jello for a close to 10 second bout of invincibility. Surprisingly the potato gun’s is the least useful; it creates a giant potato that explodes but has a narrow radius. Oddly enough you’ll probably find more special weapon power-ups than the normal ones.

This is a slower paced shooter despite the seeming chaos every second yet despite that it is still engaging. This would have made a perfect entry level shooter for anyone new to the genre thanks to its balanced difficulty. Regardless of whatever difficulty selected the game is highly accessible; you respawn upon death up until the final two stages, weapons are only downgraded one level if you die, and taking advantage of the simple scoring system (killing multiple enemies in one shot yields higher score multipliers) will earn extra lives at a decent clip. Completing the game on hard is a task in itself with a few changes thrown in here and there to make it worthwhile.

At six levels the game isn’t too long, luckily there are a variety of minigames to partake in. Punch ball is a combination of air hockey and Pong, a strange combination but one that works. Sky Circuit is a horizontal racing game with six levels, pretty impressive. Tank battle seems out of place comparatively, as it is an overhead tank battle (duh) that used exclusive graphics but I didn’t find it very entertaining.

2d games were not all too common on the PlayStation and so every game was scrutinized. Even when compared to titles on the Saturn, the reigning 2d champion of that generation, Harmful Park looks exceptional. The game is full of gorgeous artwork that will have you pausing the game just to take it all in. The menagerie of enemies you face come in shapes and are downright bizarre, such as a doggie helicopter, flying squirrels, and even beer guzzling, fire breathing…..I don’t know what the hell they are. The bosses are even more off the wall. The first boss you face is an inflatable fire breathing dinosaur, which sets the nutty tone. There’s a Frankenstein with finger lasers being controlled by a cat inside his brain (I can’t believe I just typed that). Stage four pits you against a teenager at a drive-in theater who is only viewed from the neck down. For a reason. My personal favorite would be the heart shaped demon who entices a bride to wed another man in the wedding procession, prompting the would be groom to cry tears of death.

More impressive than the sprite work are the game’s intricate backgrounds. The amusement park setting allows the game to cover a range of locations, from a haunted house, drive-in theater, to the final level set inside a beer tavern, all immaculately drawn. Blink and you’ll miss a ton of small details such as a cow being abducted by aliens, a fairy princess being swallowed by a hippo, and the more ridiculous like pandas riding pandas, bats wielding baseball bats, and pretty funny gorilla riding a cow train. The game is also graced with some of the best hand drawn explosions I’ve ever seen.

What I wouldn’t give to see this rereleased so everyone can experience its great gameplay and some of the best 2d art I’ve ever seen. For shooting veterans and novices Harmful Park has something to offer everyone.