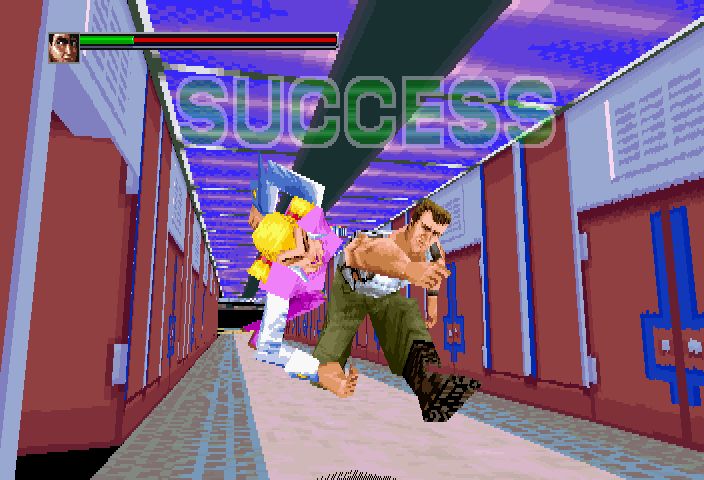 The 32-bit generation saw a renaissance within many genres as they moved to 3d, most specifically sports, racing, and 3d platformers. But it also many take a step back or disappear altogether. The scrolling shoot em up all but disappeared from America and the other mainstay of the 16-bit days, the beat em up was left on a milk carton. There were a few attempts to bring the genre to 3d but eh, the less said about those the better. Sega however that it could be done with Die Hard Arcade and aside from its far too short length should have been the model other games followed.

There’s a funny bit of history behind this game’s creation. In Japan it is known as Dynamite Deka but has no association with the movie. However one look at the box art and the main characters and it is blatantly obvious where they drew “inspiration”. Even the game’s plot of a terrorist who has taken over a skyscraper is the same. Well here they are trying to steal the contents of a vault and have kidnapped the President’s daughter as backup but that’s neither here nor there. Rather than being sued Sega of America teamed up with Fox to make this an officially licensed game like it should have been.

In terms of feel this plays less like a traditional beat em up and more like a side scrolling Virtua Fighter. The character movement bears it out as well as the floaty jumps which are identical. Thank Christ there’s no block button. One aspect which shouldn’t have been brought over is movement; you can only face left or right and you don’t walk so much as hop in spurts. It’s silly and does cause a few issues since you can’t lock onto a target; full 3d movement would have been better served. Luckily you can work around it.

The Virtua Fighter connection (albeit tangentially) does come with some sweet perks. The game has a robust fighting engine, something that most beat em ups can’t claim. There’s a pretty large arsenal of moves depending on the buttons pressed once an opponent is grabbed or in the middle of a combo. In addition to martial artistry there are a ton of breakable objects that can be used as weapons as well as a never-ending stream of bad guys with all sorts of weaponry. I dare say you will rarely find a moment where you aren’t armed or surrounded by armaments waiting to be picked up.

The game was also ahead of its time with the incorporation of quick time events. These brief cut scenes usually challenge you to duck or pull a quick punch to avoid getting hit. Unlike modern day QTEs the penalty for failing is very small; you’ll either end up in a brief encounter or take small damage. While QTEs are on my shit list at least here they take place in between rooms rather than breaking up the action.

Unfortunately it’s all over far too fast. The game certainly lives up to the arcade in its title as it is way too short. Each of the five levels will only last a scant 5 minutes at best, meaning most will finish the game in a half hour with little incentive to go back and replay the game. By default you have a single life and 3 credits which can be tough to manage, especially as some of the cheaper enemies can catch you in a loop and drain your life bar in seconds. However you can play the optional deep scan minigame to win as many credits as you need. No matter how well executed the gameplay it can’t make up for the game’s brevity.

Surprisingly this is still one of the better looking Saturn titles. While it exhibits the low polygon look of most game from that era DHA also ran at a higher resolution than most of those same games, giving it a sharper look. Character animation is incredibly smooth and the game runs at a rock solid frame rate. Of course most bouts take place in smaller arenas so it isn’t too taxing but considering most of that eras games ran at abysmal frame rates its much appreciated. The Saturn version’s music is redbook audio so unfortunately it constantly stops and starts with each new scene, not that it was all that memorable.

If Sega had included exclusive levels or a few extra gameplay modes like the later Zombie Revenge I would have no problem recommending the game. But with so little content it’s not worth a purchase. At least the Saturn version. In 2006 Die Hard Arcade was ported to the PlayStation 2 as part of the Sega Ages line. This version is less a port and more of a complete overhaul with completely new graphics and most importantly extra modes and costumes to entice you to play the game multiple times. While it was never released here like all of the Sega Ages games it is completely in English anyway and definitely worthy of a purchase.