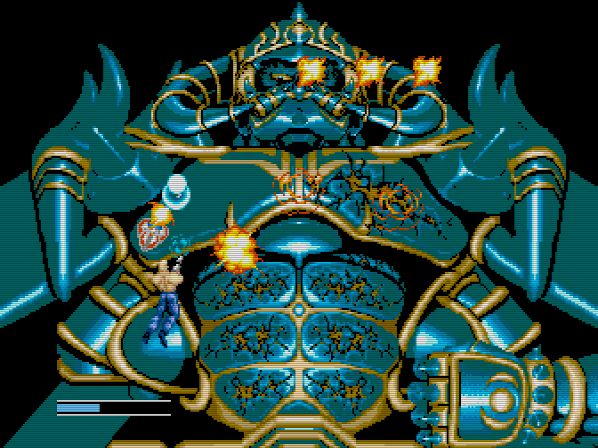 Forgotten Worlds was one of the first Genesis games released and also one of the first I had the pleasure of playing. While clearly downgraded its pretty amazing what Sega managed to pull off in a mere 4-meg cart. The Turbo CD game would come a few years later and while it isn’t the absolute slam dunk it should have been it gave us all a tantalizing glimpse at what a near perfect arcade port could be.

Right away the visual difference between this CD rendition and its Sega counterpart are apparent. The game runs at a higher resolution which allows for more detail and larger sprites. The size difference in the sprites is readily apparent when you face off against the bosses; their huge! The dust dragon occupies nearly 75% of the screen and you can see his entire torso rather than just his belly. The massive War God that might as well be the game’s signature figure has seen a similar size increase with his entire upper body visible for you to destroy piece by piece.

There were large segments of the game’s backgrounds that were simply excised or simplified that have now been restored making for one spectacular journey. The vibrant color palette is in stark contrast to its Genesis equivalent and really brings out the beauty of this ruined world. You could make an argument that the darker palette of that version showed how ravaged the world had become but it simply wasn’t accurate to the arcade. The one element that didn’t make the transition is the parallax scrolling. The flat backgrounds are literally crying for some form of scrolling and it is a big loss however the rest of the game’s visual prowess makes up for it.

Sound is another area that has seen a considerable upgrade thanks to CD technology. Most probably weren’t able to appreciate the game’s music due to the noise prevalent in most arcades so they were unaware that Forgotten Worlds has a fantastic soundtrack. All of the sampled speech (such as it is, play the game and you’ll know what I’m talking about) has been carried over as well and while it isn’t as clear as it should be the developers deserve kudos for going the extra mile including it.

While the visuals are more accurate the game’s controls are not. Unfortunately this version has the same control issue but is even more awkward. Dual analog sticks were still nearly a decade away and so you rotate the satellite clockwise/counter clockwise with the face buttons except in this case you have to use Button I and the Run button which is just plain silly. Since you have the option to turn on auto fire it would have made sense to allow you to remap the controls since one button is free but no such luck. It’s manageable but aflat out unintuitive. Too bad the special three button controller (or even six button) never saw a US release.

From a gameplay perspective the CD version is much closer to the arcade. It retains all of the arcade game’s levels with no cut sections making for a much longer experience. Longer is relative; even with all of the coin ops levels this is still a short game at only five levels but the game is so fun that you’ll probably replay it more than a few times.  This version is noticeably harder than the Sega game as Zenny isn’t as abundant and the enemies are more aggressive. There were all sorts of objects in the environment that when destroyed dropped massive coins that are no longer present meaning you’ll have to be more frugal with your item purchases in the shop.

Part of what also makes the game more difficult is the omission of coop. This is a huge blow to the game’s longevity as it is a great multiplayer game. With two players dealing with the hordes of enemies was easier and for those that needed a challenge you could bump up the difficulty. It’s kind of funny to see both characters in all of the game’s cutscenes and promotional material but you’ll only ever see one of them in game. I blame this on the system’s lack of two controller ports; for those unfamiliar with the Turbo Grafx-16 you needed to buy the Turbo Tap for any kind of multiplayer which is one of the most boneheaded design decisions of all time.

This CD edition is clearly superior to its cartridge counterpart however it still manages to be deficient in a few categories. It’s the obvious choice if you have to pick a side but at this point arcade perfect ports are available in the Capcom Classics Collections for numerous consoles with dual analog controls to boot.