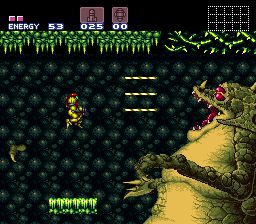 The greatest video game of all time. The best overall Super Nintendo game. Masterpiece. Many are the accolades that Super Metroid has received over the years and they are all accurate to an extent. The scary thing is the game really is that good; Super Metroid is one of the best video games ever created and a master course in game design. As one of my most anticipated releases it did not disappoint and even after nearly 20 years of endlessly replaying the game I’m still discovering new secrets and hidden items. It has spawned an entire genre of games in its wake from the numerous handheld Castlevanias to superb indie titles such as Cave Story and Valdis Story. But beyond all that it is simply an amazing sci-fi game that does everything right.

Picking up directly after the events of Metroid 2 Samus delivers the lone baby Metroid to the Ceres Space Colony to see if they could harness the Metroid’s energy seeking powers. It isn’t long before the space station is attacked by the space pirates and the Metroid larvae kidnapped and taken to the Planet Zebes with Samus in pursuit.

Metroid was our first taste of what a nonlinear adventure entailed alongside the Legend of Zelda and Return of Samus provided a bit of back story to the proceedings. But both games were not without their flaws. It was Super Metroid that would take stock of what did and did not work and reduce the frustrations many had to deal with in this nascent genre. With an auto-mapping feature and waystations that provide a rough map of your current locale gamers no longer had to break out the graph paper to chart their progress. That is only a fragment of the improvements that make this one of the best adventure games of all time.

The return to Planet Zebes is both familiar and alien at the same time. Your initial journey into its corridors will take you back into the most memorable areas of the series’ first installment as the planet is completely lifeless. Once you’ve taken the morph ball from the same pedestal the world comes to life as the pirates are now aware of your presence. The first hour or so of progress is guided as you are herded toward the basic tools you’ll need go off and explore on your own. Once you’ve destroyed your first major boss the entire planet is more or less at your disposal as you seek new power-ups to further mine the depths of this gargantuan world.

And what a set of weapons they are. Each new item added to your arsenal produces a domino effect as you’ll think back to prior areas you couldn’t access before. A number of new beams join the now classic ice and wave beam and they all stack on top of each other to produce an alien killing beam of destruction. The power beam lets you charge up a more powerful shot while the spazer gives it the power to pass through walls. The screw attack is saved for late in the game as it is the most powerful and trivializes most of the content.

The old favorites are nice but it’s the new stuff that is the most exciting. Super missiles and power bombs are insanely powerful and will also reveal hidden passageways and shortcuts. The Speed booster is possibly the most fun addition as you plow through walls and enemies after building up speed. The grappling hook is used extensively to swing across gaps or to even latch onto certain enemies. For the obsessive compulsives that need to find everything the X-Ray scope will be your new best friend. At the touch of a button you can scan every room to reveal items, traps, breakable blocks, etc. It’s amazing how well hidden some of the missile upgrades are; there are times the X-ray Scope will show one directly under your feet!

The best tools in the world would be nothing without suitable localations to use them in and once again Super Metroid delivers. Each of Zebes’ six regions are distinct, from the plant laden Brinstar, lava filled Norfair, the underwater Maridia and the derelict remains of the Wrecked Ship. Each is absolutely massive in scope and even accessing the map of each area doesn’t tell the whole story as there are tons of secret passages that you’ll have to discover on your own. It’s a literal work of genius the way every area on the planet is connected and you unlock shortcuts to each one. Some you can explore nearly completely the first time through but in most cases you’ll need to save certain portions for later once you have the appropriate item.

Or not. The beauty of the game’s design is that most of its weapons are completely optional and with enough skill you can still manage to explore each area. Sequence breaking has been alive since the original Legend of Zelda but Super Metroid is one of, if not the game that popularized this concept. The game has enjoyed nearly 20 years of popularity as gamers of all stripes try to obtain the absolute bare minimum for completion and shave time off the clock. With multiple endings it’s almost encouraged in order to earn the best ending.

Beyond the multiple endings there is still lots to discover about the game. There are a number of advanced techniques such as the crystal flash, bomb jumping, beam shields, wall jumping, and even super jumping (which looks ridiculously cool). What’s cool is that there are instances where the game will show you how to perform these without explicitly stating so; pay attention to the non-hostile aliens you encounter.

Super Metroid isn’t big on special effects but instead nails the cold and lonely feels it’s going for thanks to expert art direction. The environments are filled with tons of details that are easy to miss; bugs feast on dead bodies, loose wiring produces sparks, and flower petals fall heavily in the distant backgrounds of Brinstar. When the game does decide to use an effect it’s always to heighten the atmosphere; the heat haze used in Norfair really sells you on the temperature of the environment. The bosses are a far cry from the forgettable mayors of the series’ first installment and resemble something out of a nightmare. Kraid is no longer a squat midget but a massive two story tall monstrosity. Ridley is one of the game’s most difficult encounters and is joined by the creepy Phantooon and Crocomire. I’ll just say this about the game’s finale; the fight against Mother Brain is one of the greatest in video game history.

The soundtrack aids in setting the right tone for each location and is perfect. The atmospheric music is has amazing range and never limply plays in the background. It’s creepy when it needs to be, such as exploring the frigate before the power is restored. Laid back and dreary when exploring Maridias’ aquatic confines, and dark and foreboding, especially when you reach Tourian and see its residents drained of life.

What more needs to be said? Use whatever metric you want and you’ll still come to the same conclusion; Super Metroid is one of the finest 16-bit, no, games ever made and a classic in every sense of the word.