Black Bass NES Game Cartridge
The Black Bass was released in 1989 for the NES and HOT ?B developed it. It is the second game released from HOT ?B since Japan had and exclusive 1986 game also titled The Black Bass. Therefore, the game is Japan is known as The Black Bass II. The title screen when playing read The Black Bass USA.
The concept of Black Bass is to catch as many fish as possible from morning to night. You can select to either play as a beginner, or play a ranking game, which requires a password. You then select a spot on the lake to start fishing and you start the process by tossing a lure out with whichever power you decide to throw the lure. You can attract a fish by moving the lure, and when the fish bites, you can start reeling it in. Bass are the main fish to get you points and a higher ranking, and all other other fish, unless they are over 3 pounds, give you less points. Once you start to reel the fish in, you must be cautious to not have too much constant reeling, which can cause the line to break and lose the fish and lure. You can also change your type and color of your lure between casts.
UPC: 0-93455-10001-2
Platform: NES
Players: 1
Condition: Used
Genre: Sports
Region: NTSC (North America)
Rating: Everyone 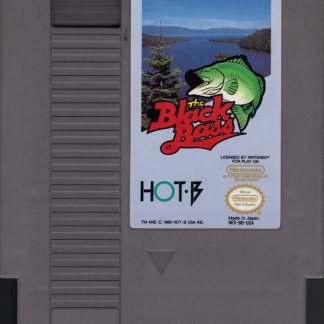