NES Open Tournament Golf Nintendo NES Game Cartridge
NES Open Tournament golf was released or the NES in 1991. It was the second golf based game Nintendo published, for NES, with Golf being the first. The first player is Mario with the second player as Luigi, which was like most of the Mario games around that era. They both get offered advice from their caddies at specific points in gameplay, with Princess Toadstool as Mario’s caddie and Princess Daisy as Luigi’s caddie. Donkey Kong is also present as another non playable character. He is the accountant that is secures prize money for Luigi and Mario. The game has three courses, being UK course, Japan Course, and US Course.
There are four game modes in NES Open Tournament Golf. The first is Stroke Play, which the player will need to play to become eligible for getting promoted up the ranking. If the player does well, they will get offered a chance to go up to another level. This will require playing two of the 18 hole golf rounds, usually. The player starts at beginner, being promoted and progressing to amateur, semi-professional, and then professional. The title screen will display their rank. There is also a Clubhouse mode where the player can toggle between many different options and view certain types of game data. These choices are Register Name, Choose Clubs, Options, Player Stats, Prize Money, Tournament Roster, Training, Hall of Fame Holes, and Clear Saved Data.
The next mode is Match Play, where the winner gets determined by who wins more holes. The player will need to get the lower score than the opponent to win the hole. If both the player and the opponent have the same score on the hole being played, it will result as a tie. When all 18 holes are played, the golfer who won more holes than their opponent wins the entire match. If there is a tie after all 18 holes, the match will restart at hole 1 until there is a winner. Luigi is the first opponent in single player, and when the player beats him, there will be four new characters to face. Steve will be at the beginner level, Mark will be at the Amateur level, Tony will be at the Semi-Professional level, and Billy will be at the Professional level.
The final mode is Tournament, where players can play either Match Play or Stroke Play. The player can earn money depending on their rank and their score on the round. There will be a scoreboard after the round ends. Rankings go from 1st down to 37th rank. The higher the player ranks in the round, the more prize money the player will win. The player can view the prize money in the Clubhouse under the option Prize Money. Total prize money earned is saved for the player even with the power off. The option Bet On 1 Hole can be selected if Match Play is chosen. A computer opponent in the mode will challenge the human player to a single hole. The lowest score will win the match. The player will get prize money if they win, with the option to keep playing to another hole to increase the prize money amount. If there is a draw, the player can keep playing to another hole for the same prize money from the previous hole. If the player loses, all the prize money will be lost that was set for that hole and the match will come to an end.
UPC: 0-45496-63066-9
Platform: NES
Players: 1-2
Condition: Used
Genre: Sports
Region: NTSC (North America)
Rating: Everyone 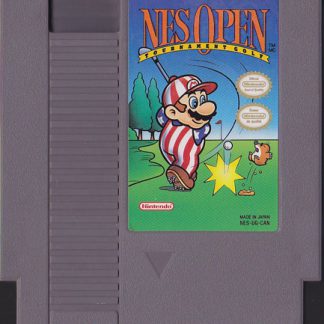