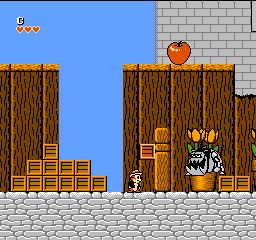 During the Disney “renaissance” years in gaming there were bound to be a few games that slipped through the cracks.  When you’re rubbing shoulders with the likes of Ducktales and Darkwing Duck it’s kind of hard to stand out.  While it was somewhat popular in its day Chip & Dale’s Rescue Rangers has been forgotten, which is a shame because although easy, it is an excellent platformer that continued the legacy of prior Capcom hits.

Arch nemesis Fat Cat has kidnapped Gadget and it’s up to our intrepid duo to find her.  With appearances by most of the cast of the show fans have a lot to look forward, not only because the fan service but because of the excellent gameplay.  Although it very clearly is using the same basic engine as Ducktales Rescue Rangers features enough elements to give it its own identity.

Where Scrooge McDuck had a multipurpose cane to deal with every situation the Rangers have the ability to pick up and throw nearly everything in the environment.  From boxes to, crates, even fruit if you can lift it now it’s a weapon.   Some have other uses as well, with crates allowing you to hide from enemies inside or stack them to overcome obstacles.  Health powerups and stars for extra lives are in plentiful supply so game over is never really a serious threat.  Monterey Jack makes brief cameos to bust open doors and Zipper doubles as invincibility (kind of like the Hudson Bee, oh shit).

There are surface similarities to Ducktales, such as the map screen to select levels however unlike that game you can completely bypass certain ones if you so choose.  There are enough stages in the game that you can plot a few different courses to the end for some replay value.  The 2-player coop adds to the fun as well.  It almost shouldn’t work since this is a very fast paced game but like Contra the ever present danger of falling behind will keep both players on their toes.

The only downside would be that the game is far too easy.  There are few tricky spots and the extra lives and health are practically thrown at you.  That isn’t to say it’s a cakewalk; because the pace is so swift you can run into off screen enemies frequently but it’s nothing you won’t adjust to.  The boss battles, while visually impressive for the system, are bereft of any challenge since they are all basically the same: chuck the available balls upward at whatever target is presented, the only differentiator being how many are needed to win.  I mentioned the visuals which are all around pretty damn good, playing off the size of the protagonists in their environment and turning everyday appliances such as running faucets into legit threats.  Another nice little touch: carrying heavier objects makes you sweat visibly and jump lower, a minor detail but it at least showed Capcom cared unlike a certain company that was Ack!  Lame.

It’s on the easy side but still long enough to provide an afternoon of fun.  Rescue Rangers is one of the forgotten classics of the NES that should not be missed.