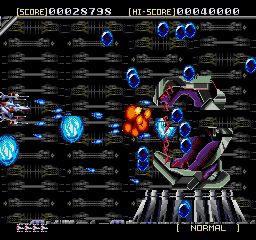 Now here’s an odd one.  Usually ports between the Genesis to the Sega CD were a one way street.  The vast majority of these only added grainy FMV intros and a CD soundtrack but at least it was something.  Sol Feace went the other way: a CD game that was ported to the Genesis with not much loss in quality and a name change.

Sol Deace was released in 1992 for the Genesis and 1991 on Sega CD.  In the year 3300 advances in AI lead to the creation of a super computer that is supposed to lead mankind.  Rather than the humble benefactor we were expecting it instead becomes a dictator and enslaves humanity.  One scientist creates a star fighter but is killed before using it leaving our protagonists to take up the cause.  No one really knows why the Genesis port was made seeing as the Sega CD version was packed in with the system but regardless it helped to give the game wider exposure.

The 7 levels take you on whirlwind tour of the galaxy as you make your way back to Earth.  Like most shooters of the time you can alter your speed which comes in handy frequently.  Unlike typical shmups collisions with the environment will only bounce you back which can be used to your advantage.  Even your ships exhaust heat can be used to flambé enemies.  The action gets hectic pretty frequently so having one less impediment is a god send.  Luckily you have access to an assortment of armaments to even the odds.

The main “hook” of Sol Deace comes from the ability to reposition your two cannons into 3 formations: focused fire that shoots straight ahead, wide spread that covers a sizable portion of the screen, or 2 shots forward and one downward.  The weapons you collect are attached to the top or bottom of your ship depending on the direction collected.  It can lead to interesting strategic combinations in conjunction with the way you position the cannons and can trivialize many portions of the game.  For the most part though you can easily stick to the default arrangement and have no problems.

While there isn’t anything particularly bad about Sol Deace there’s nothing exceptional either.  Many of these elements have been done before, which isn’t surprising considering the amount of shmups on the Genesis.  The levels are the biggest offender in this category.   There are arms that stretch out to grab you like Life Force, a fire level again reminiscent of Life Force, and a fight against a massive space ship like Super R-Type.  The sci-fi enemy designs wouldn’t out of place in any number of other shooters, which is disappointing, because I can see how they at least tried to give the game its own identity.   The graphics, while slightly generic, are decent, with every new planet offering something differently visually, even if it’s not on the level of the Thunder Force series.  The soundtrack is catchy whether its CD or cartridge and was given more love than the graphics it seems.  The same can’t be said for the sound effects though, which are repetitive and grating.

Solid but unspectacular is how I would sum up Sol Deace.  The differences between the two versions are minor: the CD version has Redbook audio, while the cartridge version has a different intro and better ending.  Either version is viable but I would only recommend this if you’ve exhausted all of the other superior shooter options available