Alpha Mission NES Game Cartridge
Alpha Mission was released for the NES in 1986. It was originally an arcade game in 1985. The game was developed and published by SNK. It also spawned a sequel in 1991 called Alpha Mission II that was more successful. The game is set in the Tetrenova galaxy where a war has exhausted worlds and resources. The survivors make a plan together to go find another place and rebuild, which they end up choosing an undeveloped Earth.
The game is single player and is similar to the likes of Xevious in the segregation with its air on air and air on ground weapons. Missiles will be used to destroy the ground enemies and the laser weapons will be used to destroy the aerial opponents. The player will take control of a ship named Syd throughout every level to fight waves of the enemy that is threatening many space stations. There will be a boss that will need to be destroyed at every level’s end. If the player is destroyed, all their weapons will be lost and the player will be moved in a spot a little before they were destroyed. The ship of the player can be upgraded with better weapons during gameplay by getting a variety of power ups located in every level.
UPC: 0-18484-14500-1
Platform: NES
Players: 1
Condition: Used
Genre: Shooter
Region: NTSC (North America)
Rating: Everyone 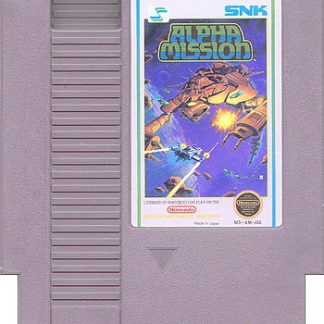