Flight of the Intruder NES

Flight of the Intruder NES Game Cartridge
Flight of the Intruder was released for the NES in 1991. Rowan Software developed the game and SPectrum HoloByte published it. The game’s story is based loosely on a novel with the same name. The player will fly many missions from an aircraft carrier in the Yankee Station. There really isn’t a story line, however it is set during the Vietnam War conflict. In the campaign mode, a player will progress through different Vietnam War air campaigns, with mission one being the incident on Tonkin Gulf, with casus belli escalating that conflict. This flight simulator will have the player choose a McDonnell Douglas F-4 Phantom II or a Grumman A-6 Intruder from the aircraft carriers that are against North Vietnam targets.
The players are challenged by both enemy defenses that are comprehensive and complex and restrictive engagement rules of that period. The realistic features will include missiles that are unreliable and the Phantom’s smokey engines. With a lower realism setting, the F-4 will have an internal cannon on top of missiles. This is contrasted to a real F-4 that only had missiles. A lot of different mission types will be available, from SEAD missions that require close cooperation with the call signs to air patrols with combat or bomb runs. Every mission can be planned into detail by the player. The player will choose from a variety of armament options on every plane based on the amount of airplanes that will be in their flight. There is the mission editor that will allow changes in the way points and how friendly the AI will behave during every phase on a mission. The player will also have an option of defaulting the load out to keep way points unchanged.
During flight, a player will be allowed to be able to switch their planes whenever they want, being able to take control of the respective plane or spectate the AI fly the plane. There is a fast forward option to shorten waiting time on transit legs from the aircraft carrier and back. It will slow down to normal timing progression when a hostile airplane is within visual range. The cockpits of the aircrafts, especially the targeting systems and RADAR’s different settings and modes, and flight controls will be complex. The game will offer realism on different levels and difficulty, coming with a manual that gives background stories that quote the real pilots during that era. The player can leave carrier landings to AI or fly them manually. This will require maintaining the aircraft within a small envelope to have a safe landing. The difficulty will increase one more time in lengthy missions in the end.
UPC: 0-50047-10501-5
Platform: NES
Players: 1
Condition: Used
Genre: Simulation
Region: NTSC (North America)
Rating: Everyone 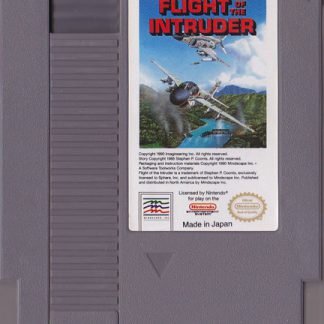 You're viewing: Flight of the Intruder NES $19.99
Add to cart