Top Gun NES Game Cartridge
Top Gun was released for the NES in 1987. It was developed and published by Konami. The player will fly the F-14 Tomcat as Maverick, like in the film. They will need to finish four missions. Before a mission starts, the player will be given the choice of three different types of missiles to take along with the machine gun, which will have infinite ammo. The stronger the missiles are the player chooses, the less quantity they will have. The first mission will be training, the second will be chasing an aircraft carrier, the third will be the enemies base, and the fourth will be the enemies’ space shuttle. All the missions, except the first, will feature a final target that will withstand more damage than the regular targets.
The gameplay will be inside the cockpit, having a first person perspective. The two themes of every level are the dog fighting and ten landing the jet. During the dog fights, a player will choose on of the three missiles to use against the enemies. The enemy jets will come flying from behind, shooting at the player and can be taken down easily, or the enemy jets will come straight toward the player firing missiles and guns. Landing the player’s jet will be difficult since it will require a player to the plane’s angle and speed. The perspective during the last landing sequence will be from the carrier’s side with the player’s jet coming from the screen’s right side. If the player is successful, they will be rewarded bonus points. If they crash, it will cost the player a life.
The game will have two different endings. If the player dies but achieves at least 50,000 points, there will be a still shot of a player being given a Top Gun plaque, the same one that Iceman was given during the film. If all four missions are successfully completed, there will be a scene of the player’s F-14 on a carrier with themselves waving to the LSO crew.
UPC: 0-83717-11008-8
Platform: NES
Players: 1
Condition: Used
Genre: Simulation
Region: NTSC (North America)
Rating: Everyone 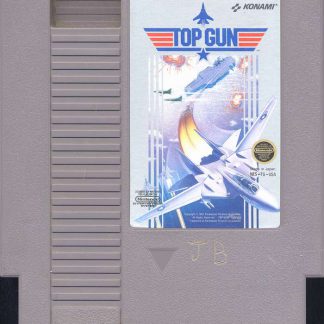