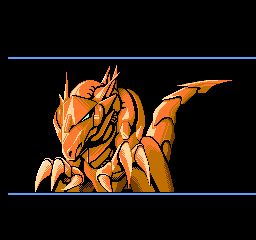 I was never too fond of Dynowarz growing up.  It isn’t necessarily a bad game like Ikari Warriors II; it just suffers from being bland and uninteresting.  How they managed to accomplish that feat in a game about robotic dinosaur mechs beating the hell out of each other I’ll never understand.  Dynowarz does not capitalize on its concept and as such commits gaming’s greatest sin: it’s boring.

The Spondylus Solar System is a man-made environment overseen by the central computers.  One by one however each computer has been affected by an unknown virus, cutting off life support and allowing mechanized dinosaurs known as Robosaurs to roam freely.  Professor Proteus, creator of both Spondylus and the Robosaurs deduces that his former protege is behind the attack and dons a battle suit and sets out to stop his former student.

Dynowarz in some respects resembles a poor man’s Blaster Master.  Divided into two distinct halves each of the game’s seven levels begins in Cyborasaurus as you battle your way to the computer compound of each planet.  It resembles the NES Godzilla game but on a smaller scale and shares many of that game’s problems.  These levels pit you against other Robosaurs as well as smaller turrets and indigenous life.  Your large size makes you a giant target, with little room to maneuver your lumbering dinosaur.  The placement of turrets and smaller enemies are such that it’s better to simply avoid fighting altogether.  Sure you’ll take some damage but in most situations it’s unavoidable anyway.

Cyborasaurus can pick up numerous different weapons that can be powered up 3 times.  The Fist launcher, Bombs, Beams, and Fireballs all differ in range, attack speed, and power.  The game is a bit too generous with weapon drops but it at least allows you to experiment and see which your favorite is.

Defeating bosses allows access to each level’s AIC.  Like Blaster Master these segments take you out of the mech however here the focus is on platforming as you make your way to each life support computer to destroy it.  There are no extra weapons, placing the focus squarely on how well you can time your jumps.  The few enemies available are nuisances that barely warrant attention.

And that’s all there is to the game.  The major issue that brings down Dynowarz is its repetitive nature.  There is a very small selection of enemies to fight, meaning you’ll face the same 2-3 dinosaur hybrids on every level and their attack patterns never change.  Even the bosses are recycled midway through the game.  There are only 3 tunes in the entire game, one of which is a 5 second ditty during cut scenes.  The overall presentation is average in my opinion.

The weapons are ultimately unsatisfying, with each presenting their own problem.  The fist launcher follows a particular path, leaving you vulnerable to attack until it returns.  The Bombs travel in an arc and although the splash damage is lovely it leaves you open when enemies get in close.  The fireball and beams are only useful when fully powered up but in that case you wonder if it’s worth it to even bother keeping them that long.  Normally you would adapt to each weapon’s quirks to overcome the situation but the enemies attack in such unpredictable ways that none of your equipment seems adequate.

On foot the repetition is even more pronounced.  All 7 AIC rooms share the same graphical tile sets, meaning they appear identical aside from the room layouts.  On the same token entire rooms are repeated wholesale, down to the placement of floating platforms and gun turrets.  Each computer boss is exactly the same, with the only difference being the arrangement of platforms.

While Dynowarz is repetitive it’s at least easy.  You are gifted with a generously long life bar and energy pickups are in ready supply.  In addition barrier items basically grants you a shield that depletes instead of your health, making you all but invincible.  Aside from some spotty collision in the Professor sections chances are you’ll never die.  You also receive a password after every stage as well and have unlimited continues; Bandai really went out of their way to make this accessible but neutered the game in the process.

Taking my problems with the game into account Dynowarz is strictly average.  There are better games featuring the same style of gameplay available on the NES, leaving Dynowarz as the odd man out.