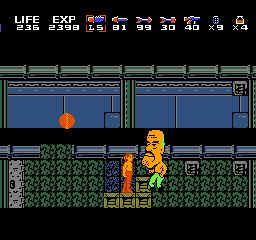 There have been a ton of bad licensed video games and Rambo counts as one of the absolute worst. Even back in the day I distinctly remember my family going into it with low expectations based on the back of the box and it couldn’t even meet that low bar. This 1988 release came from Akklaim/LJN, a name we would learn to fear but by that point I think everyone was still in their “all video games are great” phase. This is a flawed piece of work that fails on almost every conceptual level and should be studied by anyone who wants to learn how to make a video game as to what design decisions to avoid.

Based on Rambo: First Blood II the game opens with John Rambo spending time in a military prison until Colonel Trautman offers him a special mission. It seems someone is needed to go behind enemy lines in Vietnam and photograph the POW camps there but not to engage the enemy and free the hostages. Somehow they’ve decided John Rambo is just the man for the job. Did they forget why he was in prison in the first place?

If nothing else I can respect the developer’s ambition to make something more than a Contra or Commando rip off (which ironically they did for the MSX). Rambo has more in common with Zelda II with its mix of RPG elements and side scrolling action. The game follows the plot pretty closely although you’ll have to suspend your disbelief as you fight giant spiders, flaming tigers, and men whose heads double in size when hit. There are villages with people to converse with and simple fetch quests to complete. The game delights in offering choices in dialogue that don’t matter since the story won’t progress otherwise. These are about the only positive attributes within the game.

There’s a large cache of weapons available however aside from the arrows ammo is scarce. That box art of Sly Stallone with an assault rifle looks pretty cool doesn’t it? Machine gun ammo is the least common in the game! The poor hit detection means your arrows and throwing knives won’t even connect and the grenades are useless. So in other words get used to that stupid knife. Unfortunately the knife is the worst weapon due to its short range and lack of power. For most able bodied threats you’ll end up trading blows and flying enemies that don’t come in a straight line are a nightmare to deal with. In the beginning stages of the game you’ll mostly deal with tiny spiders, bees, flamingos and the occasional flying skull (yes, really). These graduate to armed soldiers and tigers; it’s rare to deal with any of these threats without suffering some damage.

While it would be prudent to avoid conflict the game adapts the worst aspect of role playing games: grinding. Killing enemies rewards experience which will level up the knife’s damage. Like I mentioned before the knife will be your go to weapon unfortunately and raising its damage is imperative as later in the game the enemies and bosses become significantly stronger. This means lingering in the same area for well over half an hour or longer to draw blood from a stone. Your health meter will increase after defeating bosses and “hidden” enemies which does alleviate some of the frustration associated with combat but is less than ideal. It is very easy to miss some of these enemies and it’s not as if the game makes it clear they are important. I imagine most will run away from the flaming tiger or motorcycle soldier unaware that they are missing out on an important upgrade.

All of the frustrations associated with combat (and they are many) could have been dealt with if basic navigation in this game weren’t so god damn terrible. Walking in a straight line will usually loop you back around but in some cases it will return you to a different point than where you started. Even that isn’t an iron clad rule. Sometimes you walk one screen to the right and two to the left and end up in completely different area. It makes no sense! The north and south exits on the ground will warp you to new areas but sometimes these are only one way, meaning you’ll have to find your way back through the repetitive environments. If they had included even a minor half assed ASCII map, anything, to aid in your travels than maybe it wouldn’t be so frustrating. But I doubt it.

Without the maze like structure the game would last less than an hour and in this case that would be merciful. Even if the game were more balanced, had a map, and were more straightforward it would be bad. Skip this trash like you would all of the other LJN garbage.