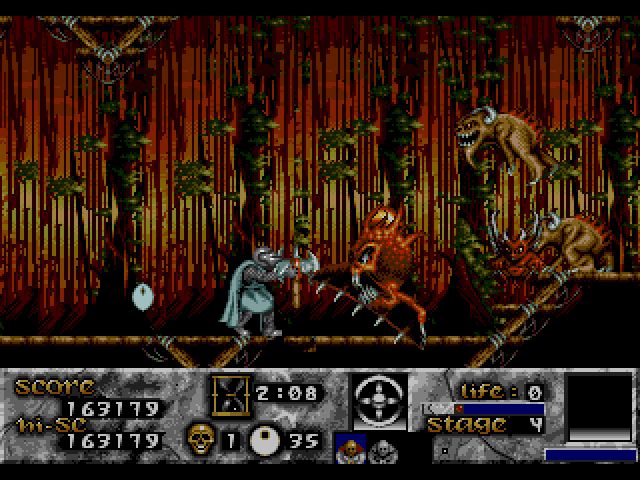 Electronic Arts is most famous for their numerous sports games and it is fair to say that they are still number one in that category worldwide. This legacy began on the Genesis however in their early days on the platform they published ports of various PC games. Some were interesting, such as Budokan and the Immortal. Being honest however a lot of that stuff was terrible. No one remembers Sword of Sodan for its “engaging” swordplay. Risky Woods is an interesting outlier in that discussion. There are plenty of likable elements in it but the off-putting difficulty spikes and scatterbrained design mean only the most patient gamers will stick with it.

The world was once a peaceful place, with monks who fiercely guarded its wisdom. The demon Draxos however came along and froze all of them except the young Rohan. Now Rohan must set venture into the Risky Woods to free them.

Risky Woods was ported to a number of platforms but the Sega version is a unique beast. Rohan was redesigned to look more like a wandering priest than an adventurer. I suppose it fits the game’s plot but dear god he looks like he belongs in a god damn Wisdom Tree game than a side scroller. The largest change comes to weapons. The shop no longer exists, with the coins now relegated to giving you a suit of armor at 33 and 66 respectively. Weapons come from the destroyed gate statues. Speaking of gates, there is now a Simon style puzzle involved in destroying the gates. It’s a cool idea but it’s also detrimental in that the clock is still running and you can’t pause.

This is not meant to be a fast paced action game and in fact trying to play it as such will result in a quick death. You need to take your time and take note of where enemies spawn and always be wary of any jump since you never know come out to take a bite. The game is very similar in that regard to Gods, another Amiga port. Yet the blazing fast clock means you have very little time to sit in one spot. The game is wildly inconsistent in this regard as there are levels with a very generous amount of time but in most cases I found that I would just barely reach the end with 10 seconds to spare.

Getting to the exit is a trial in and of itself. Everything is out to get you and sometimes you’ll die in seconds without realizing how. Most enemies move significantly faster than you, attack in groups, and will respawn if you step back an inch. The treasure chests that spawn items drop a random assortment of trinkets. However seemingly half of the items that drop will screw you over in some way. Poison is instant death, some potions will teleport you back to a set point, and there are apples that put you to sleep and shave 30 seconds off the clock! Those monks you need to save to complete the levels? It isn’t long before the levels are littered with fakes that simply take some of your health and unfortunately there is no way to tell the difference.

The game is plagued with very odd difficulty spikes. One moment you can run a good distance without any opposition and then face an endlessly respawning session of enemies. If you can believe it the Amiga original was even worse. The game’s bosses are a nightmare, not just in look but in terms of how much of a bullet sponge they are. They take entirely too many hits to kill and if you enter the fight with the wrong weapon more than likely you’ll run out of time before killing them. Don’t get me started on the final boss; what the hell were they thinking?

The one area the game excels in with no caveats is presentation. European games during the 16-bit era all had a distinctive look, be it the Bitmap Brothers metallic grey sheen or the Amiga’s color palette. This Genesis port stacks up favorably with a loss of detail in the backgrounds but a smoother frame rate to compensate. The game has a very dark scheme throughout but still manages to inject some color into its surroundings here and there. The creature design is fantastic, especially the bosses. Even the music is good although it can’t match up to the CD quality sound of its PC cousin.

Despite all of the frustrations I still like Risky Woods. But not enough that I would recommend it. There are very few action games like it for the platform but the constant enemy spawns and inconsistent hit detection get to be a bit much. With a few small tweaks this would have been a good platformer. Too bad you’ll need the patience of a saint to appreciate its good parts.