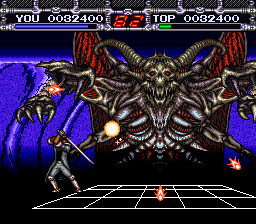 It’s interesting to look back and see how 2d action titles tried to differentiate themselves. Castlevania relied on its gothic theme and nuanced gameplay while Gunstar Heroes is all about balls to the wall action. With the advent of the 16-bit consoles came better sound chips along with better graphics and some games tried to use their music as a distinguishing factor. Activision’s X-Kalibur 2097 was one such game and while its music is certainly distinct the rest of the package is pretty bland and doesn’t help the game rise above average.

In the distant future the economy of the world has been shattered, rendering the government useless and leaving a vacuum in which organized crime has prospered. A warlord named Raptor rules Neo New York with his army of morphs but still has to fear a man named Slash, wielder of the legendary sword X-Kalibur who is on a mission to stop him. Originally released in Japan as Sword Maniac the game’s story was heavily changed during localization, not that it matters all that much. Despite the brief cutscenes after each level the game isn’t too big on plot and doesn’t need it.

The most attention grabbing aspect of the game and the one Activision used to try to sell the game is its techno soundtrack. Much like they did with Bio Metal Activision replaced the preexisting soundtrack with one performed by an electronic score by the band Psykosonik. The techno music is well composed and sort of fits the localized version’s tone but also becomes grating after a while. The original score by Hitoshi Sakimoto and others was far more fitting in this case which makes me wonder why Activision went to such great lengths to change it.

Slash’s only weapon against Raptor’s morphing hordes is X-Kalibur which comes with a variety of attacks. There’s a quick slash, a piercing thrust, and an incredibly slow overhead slash which produces a projectile wave. Possibly the most important move in your arsenal is the ability to block attacks. There is very little you can’t block; even rising gusts of flame and exploding bombs bounce off your sword harmlessly. The controls are incredibly tight and responsive with Slash retaining a surprising amount of control even when airborne.

The game’s control setup might give off the impression that this is a nuanced action adventure but in truth while the game has its moments it is incredibly bland. There is an equal mix of platforming and brawling but for the most part the generic enemies don’t offer enough resistance to make you switch attacks and deal with each differently. All it feels very by the numbers which isn’t so terrible but isn’t exactly enticing either. It’s a shame since the game has such a good foundation and what’s there is solid and with a little more care put into its pacing it could have been spectacular. This is the very definition of a C-tier release, a game with an interesting premise or gameplay hook that doesn’t do enough with it.

The one aspect in which the game does shine though is its one on one boss battles. Here the game takes on the appearance of a fighting game as you lock horns with one of Raptor’s lieutenants. Generally speaking these bosses are more aggressive and will require some manner of skill as they will frequently block your attacks and rush in if you use a slower attack needlessly. It is actually fun to decipher their patterns and slowly chip away at their health and it makes me wish the rest of the game showed this much ingenuity. These battles are so well done in fact that the game has a competitive mode where players can duke it out. Good idea in theory but it is severely limited in terms of options and comes across as more of a novelty.

Where the boss battles present a decent challenge the rest of the game is pretty easy which is why it feels so middling. Health restoring cans of coke and burgers are in great enough supply that you won’t have to worry about death outside of a few tricky areas. So long as you remember to block nearly any kind of attack you’re golden. Length is also an issue. At a meager six stage the game can be finished in a little over half an hour with no reason to go back. The versus battles don’t help the game’s longevity either as it is more of a curiosity than a long term addition to the game.

As much as I like the core gameplay X-Kalibur 2097 simply doesn’t come together in the end to warrant a purchase over any of the numerous action games available for the system. With one or two more levels it could have been really solid.