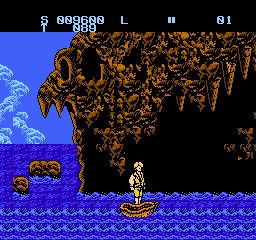 Captain Silver was released for the Sega Master System at a time where I wasn’t even aware Sega were still supporting the thing in the US. While a decent game it had its fair share of problems, many of them endemic to the arcade game it was based on. With just a few more tweaks it could have been great. In Japan a Famicom port of the game was also released and like its Master System cousin could have been a good game if the developers tweaked a few of its elements.

Of the many changes that occurred during the porting process the most disappointing is your standard attack. Jim no longer slashes his sword but sticks it out straight like a fork. It looks just as stupid as it sounds and makes dealing with many enemies frustrating. Oddly enough when you jump he’ll hold the sword at an angle which does help but is only a slight salve. While the direct means of attack is limited it is effective; once it hits you can hold the button to keep inflicting damage. This is extremely effective against bosses.

In this version of the game Jim is actually armed with a life bar as someone finally realized one hit deaths simply weren’t fair considering the way the game is designed. Although most enemies take a few hits to kill simply jamming your sword in them and waiting will freeze them in place and kill them. A bit unfair but take whatever advantages you can. The weapons you buy in the shops are overpowered and aren’t used up until you switch or die which means you can blitz through a level pretty easily.

That being said it doesn’t mean the game is completely easy. The clock counts down extremely fast, leaving you little time to dawdle. The game’s lousy hit detection means you are going to suffer from many cheap hits although I will say that extra health drops evenly. One curious bit about the hit detection that I noticed and can be equal parts helpful and frustrating deals with the bosses. Only certain parts of the bosses can actually damage you; if you crouch the massive peg legged pirate of stage two will walk right by you. It isn’t always clear however which is what makes it annoying. Towards the end of the game there is some forced platforming and like any game not focused around that it is pretty bad here. Prepare to lose a few lives to the swinging ropes.

The various incarnations of the game (the US and European Master System versions have different levels) take liberties with adapting the arcade game’s levels and the same applies here. All of the levels are present but a few have been expanded such as the caves beneath the pirate ship. Two more stages and a slew of exclusive bosses were added to make for a more well-rounded game but it doesn’t change the fact that were it not for its flaws you could finish the game in less than twenty minutes.

Though nowhere near as detailed and colorful as its arcade and Sega counterpart the Famicom edition of Captain Silver still manages to impress in a few ways. The game is notably darker than the arcade game but it seems a good fit for the direction they’ve taken with its art. In some respects I’m glad they didn’t try to replicate the arcade game’s use of color; that thing was garish and looked like an old EGA PC game. The backgrounds are incredibly detailed and feature minor bits of animation here and there that make them pop.   Speaking of animation, oh man is it bad. The way Jim just sticks his sword out to attack instead of giving it a mighty swing is just sad. The large bosses look like something straight out of Castlevania but then they start to move and you notice they only have 3 frames of animation. Overall however I would say the presentation is one of the game’s few good points.

This should have been a great game but unfortunately there are far too many elements that drag it down. While I was able to overlook some of its flaws I doubt most will and I simply can’t recommend it. I really wanted to like Captain Silver but I think I’ll stick with the Sega version or Donkey Kong Country 2 for my pirate themed platforming fix.