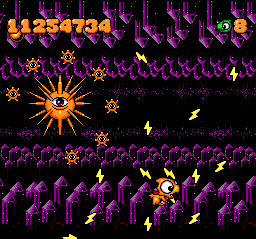 Once it became obvious that the Turbo Duo was not going to save the Turbo Grafx in the US I turned my attention towards the game’s released only in Japan with envy. There were so many cool Rpgs and legions of shooters we would never receive (although shooters were a bit saturated over here at the time) that it was downright criminal. Of course it would be almost 10 years before I would ever play most of those games I once ogled and I discovered some true gems. Coryoon is a game that has a low profile as it was released after the PC Engine CD and so went unnoticed. That is a shame as the game is simply amazing and much better than many of its later CD counterparts.

If Coryoon bears more than a passing resemblance to Air Zonk it is with good reason. Many of the same staff worked on both titles and while it might feel derivative it also means the game has a solid base. Air Zonk is one of my favorite shooters but even taking that into account I’m surprised just how much I like the game. Overly cute games are usually not a part of my gaming diet (The Twinbee games are as far as I go, you can keep your Otomedius) but I’ll be damned if Coryoon didn’t win me over. If the game were a little more challenging it could have been a classic.

The game is visually fantastic and one of the most impressive traditional Hucard titles. Like Air Zonk the game uses very large sprites set against multi scrolling backgrounds that are incredibly detailed and full of life. Unlike that game Coryoon is decently long and so it covers far more varied terrain. The settings cover most of the traditional video game staples such as a fire zone, underwater level and forest but the cartoon presentation means they certainly don’t resemble any other game you’ve seen before. The boss designs are similarly excellent and imaginative which is appropriate as they are the visual highlight of the game. The soundtrack, while bright and chirpy, doesn’t rise to the same level unfortunately. The music isn’t bad per se but unremarkable.

Coryoon keeps its primary weapon selection small at just three that can be upgraded a further two times. Red orbs change your fire into a flamethrower which is powerful but has short range. Blue produces a wave attack that increases in size at higher levels. Yellow is the thunder orb, which shoots lightning bolts in a spread formation that covers nearly the whole screen at its highest level. When you aren’t firing Coryoon will charge a powerful breath attack which can decimate bosses quickly. There are an number of secondary support items based on playing cards that grant additional powers such as a smart bomb, fairies that will aggressively seek out enemies and absorb bullets and mini dragons whose function changes based on your weapon, really cool. Weapon storks are always present so you can freely experiment to find the best fit for the current situation.

The games cute exterior belies the fact that it has some teeth. This is one of the most frenetic shooters for the system which is saying a lot. There is rarely a moment where the screen isn’t filled with bullets, fruit, enemies, and even power-ups that is hard to process at first. It is very easy to fly straight into a random bullet since they are so small in comparison to the large sprites. Yet somehow throughout all the chaos it still becomes easy to follow after a level or so. This is a much more active shooter as enemies attack from all sides meaning you’ll have to actually fly around the screen to avoid taking hits rather than simply hanging back and waiting for them to come to you. The game does a nice job of varying up its enemy waves with level hazards such as exploding crystals, maze like blocks, and other such items that will actually test your flight skills.

The only area in which Coryoon falls short is its challenge. Despite the games pace and onscreen chaos it is ridiculously easy. Provided you have a power-up you’ll never die since taking a hit will only take it away. The game is extremely generous with items so it’s rare to be caught without one; during boss battles the item stork will fly by every twenty seconds or so or immediately after you die. With all the fruit thrown around your score will shoot through the roof and extra lives are rewarded like candy. With all that in mind anyone can brute force their way through the game. It makes the game very accessible but at the same time it is disappointing in the sense that the game is so fun that it is a shame its over so fast.

I wouldn’t let that stop you however. If you are even a slight fan of shooters coryoon is an excellent purchase and well worth tracking down.