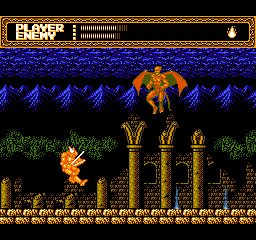 With all the resources available on the internet it’s hard to believe some games still slip through the cracks.  Especially for the NES.  Look through any list of the Top 100 games for the console and I can almost guarantee you will never see Sword Master on that list.  To be completely honest if I had never seen it in a random old issue of Nintendo Power my list would be the same.  Which would be a shame, as it’s a well put together little gem that while hard as hell is still pretty fun.

Sword Master was released by Activision in 1992.  I don’t recall any marketing for the game and there are very few reviews on the internet; how that is possible I don’t know.  The Sword Master has been summoned to defeat an evil wizard, the demon that has been summoned, and rescue a princess.  Not too much pressure there.  It’s a generic premise but the game is anything but.   What seems like a side scrolling platformer is actually deeper than normal.

To some degree every enemy encounter is a mini boss battle unto itself.  While most games focus on killing enemies before they reach you, there is a back and forth to the combat in Sword Master.  You are equipped with a sword and shield and the name of the game is identifying each enemies attack patterns, defending when necessary, and attacking when they are open.  There is a good bit of depth to learning when to block high or low, or perform an overhead slash when necessary.  Almost every fight is intense since you’ll want to perform perfectly due to the game’s unforgiving mechanics.  Powerups are few, with health drops rare and the ability to become a wizard coming later on, even though it isn’t very useful because his spells use up your experience.  Mechanically the game is sound but in practice it starts to fall apart.

The main culprit comes from the sloppy controls.  No matter what you always face forward which can create issues the few times you are attacked from behind or want to back up to make room.   It never feels right.  There is a fair bit of platforming throughout the game and one of the techniques you need to master, the falling jump, is finicky to pull of consistently.  The worst part is its required at points and you’ll more often than not fall to your death, which sucks because you have limited continues.  While it is possible to learn every enemy’s attack patterns, the game is really unfair in terms of how many they’ll throw at you in a row with barely any chance to recover life.  You have to play near perfectly near the end or it becomes hopeless.   If they could have better balanced the game it would really have been something.

The graphics are phenomenal; almost every stage features 2 or even 3 levels of parallax scrolling in the background, an effect you rarely see on the NES.  The actual art itself isn’t the greatest but combined with said effects it really makes the graphics shine.  The music is reminiscent of Castlevania and while it isn’t the greatest is serviceable.

It’s just too bad the gameplay couldn’t match the amazing presentation.  While I do think the game is good I hesitate to recommend it as it can be frustrating as hell.  I’d say Sword Master is a 7 out of 10; a good game marred by problems that could and should have been fixed.