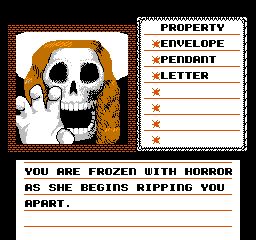 Uninvited was the last of the three Macventure ports released on the NES but technically came first on the Macintosh. While it may seem odd that these games were brought over to the action heavy NES all three were a nice change of pace for those seeking something a little more cerebral. With redrawn graphics and an actual soundtrack Uninvited is a solid and entertaining title that is criminally overlooked.

The last thing you remember is a shadowy figure running out into the road before you swerved and crashed into a tree. There’s no telling how long you were unconscious but one thing is clear; your sister is missing. With the only clue being a nearby Haunted mansion you make your way from the wreckage to find your missing sibling.

Of Kemco’s three NES point and click adventures the Uninvited has the lowest profile due to its late release. By 1991 the Genesis gained steam and the SNES had launched, leaving many little grey boxes starving for content. Which is a shame as it is more accessible with its real world setting. Of course the game isn’t too modern as apparently magic still exists but your protagonist never comments or seems taken aback by any of the mystic shenanigans going on in this crazy house. Despite the seriousness of the proceedings there is a humorous tone to the game’s text that should seem out of place but is actually charming.

Uninvited uses the same interface as its two predecessors so you can jump right in. While controlling these games with a d-pad isn’t the most intuitive it is at least serviceable. While the house is set up similarly to the mansion in Shadowgate it isn’t as large; in fact this is a pretty short game overall. The mansion only has a little over a dozen rooms in addition to the greenhouse, laboratory, and chapel in the back. What this means is a lot of annoying backtracking which doesn’t serve to pad out the game as much as was obviously planned.

Part of the game’s brevity and quick pace come from the more logic based puzzles. Whether it’s a direct result of the game’s setting or the more frequent hints doesn’t matter as most will be able to deduce where and when to use specific items pretty quickly. Even for first timers you’ll end up blitzing through the game at a decent clip as there aren’t as many items to pick up or examine. There are a few areas that I can see stumping players for hours, namely the hedge maze but these are few in number.

With less items and interaction with the environment comes less ways to die. Unless you’ve picked up the ruby there is no strict time limit like Shadowgate, and even then you can simply drop it. While the more relaxing nature this provides is welcome there are still plenty of ways to die, with the descriptive text doing a pretty good job of conveying how gruesomely you were killed. Nintendo’s censors have edited the text but they are still pretty detailed in their wording. While the death scenes aren’t graphic you do get a nice close-up of whatever horrible being is maiming your body. The most infamous being the Scarlett O’ Hara dressed ghoul (the game’s words description not mine) adorning the cover art, who rips you to shreds if you get too close. Others include being mangled to death by dogs, dissolved by ectoplasm and eaten by a giant spider.

There are two plot threads at play in Uninvited, the quest to find your sister and an apparent war between a long dead sorcerer and his ungrateful apprentice. While locating your sister is front and center at all times you’ll only find out about the wizard and his apprentice through diary entries and notes scattered about the house. Unless you go out of your way to read them you won’t stumble on to the cause of roaming undead in the house until the game’s final stages where it feels tacked on to make the game seem more epic.

Uninvited contains the same dreadful atmosphere as Shadowgate but it doesn’t reach the same level. The music is eerie but can be annoying at times but also doesn’t help give the same feeling of dread since you spend so much of the game alone in a nearly empty house. Since you don’t have to worry about dying every other screen you don’t have the same sense of fear.

While it isn’t as good as the game directly preceding it Uninvited is still pretty entertaining. With less frustrating puzzles to deal with it is also more accessible with players more likely to stick with it until the end.