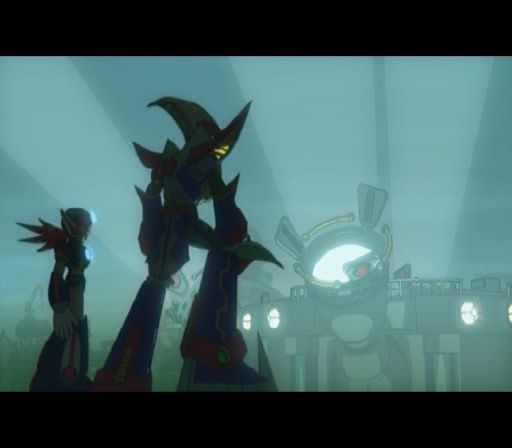 This review hurts to write. I love the Mega Man games through all of their various incarnations through the good times and the bad. The formula does become repetitive after a while but even in spite of that the games are still good at their core. Mega Man X6 was one of the series’ low points, a game that was not only a blatant cash grab but also suffered from a clear lack of play testing. And yet it was still fun in spite of its flaws. You can’t say the same here; Mega Man X7 is simply a bad game, one that suffers from both bad game design and technical flaws.

After fighting various wars Mega Man X has become tired of battle and retires from active duty. With the vacuum left by his absence a number of Maverick hunting groups have sprung up with Red Alert becoming the most famous. They are brutally efficient and it is this violence that forces Red Alert member Axl to defect. However their leader Red will not let Axl go and goes as far as declaring war on the Maverick Hunters to get him back.

I suppose it was inevitable that the series would go 3d but to a certain extent I wonder if it was necessary. The mix of 2d and full 3d gameplay is well intentioned but simply does not mesh well and causes innumerable problems when trying to enjoy the game. Had they simply used the “2.5” style of Klonoa Mega Man X7 would have turned out far better. The struggles Capcom faced in trying to adapt a 2d platformer to 3d are eerily similar to Konami’s with Castlevania 64. Both games suffer from an atrocious camera and while they have their moments I don’t think most are willing to overlook their glaring flaw to find them.

With X in retirement your protagonists are Axl and Zero at least until the game’s midpoint depending on your actions. You have the option to switch characters at any time during a level with each possessing their own separate life bar. Capcom have gone to great pains to make both characters feel distinct from one another to take advantage of the character swapping system. Zero can double jump but has lost his X-buster, relying solely on his sword. To make up for his lack of range his beam saber can deflect most projectiles. Unfortunately it isn’t enough to even the scales as Axl and X’s mega busters are far more useful.

Axl can hover in the air for a few seconds rather than double jump and while his gun cannot be charged it is equipped with rapid fire. Axl unique power is the copy shot. Defeating reploids with this weaker shot will drop a red core that will transform you into that enemy for a brief period with access to their powers. It’s a cool idea but in practice isn’t as useful as you would hope. The enemies you can copy have simplistic attacks that aren’t suitable for long term use. You’ll mainly copy enemies to walk on spikes or avoid other stage hazards such as fire to save captive reploids.

Although the game was built in 3d it largely sticks to a 2d plane like the prior installments. It is in these moments that the game gives you a hint of the solid foundation the franchise was built as you execute pinpoint platforming, defeat enemies, and save fellow reploids in need of help. I won’t go so far as to say it compares to any of the previous games but it is at least fun. Occasionally the perspective will shift for a more scenic view which feels gratuitous more than practical but it isn’t obtrusive in any way.

It is when the game decides to flirt with full 3d that it completely shits the bed. The main culprit is the atrocious camera. You have marginal control over the camera to pan left and right but in tight corridors that isn’t an option, which unfortunately make up the majority of these portions. Objects that block your view are supposed to become transparent but do so irregularly. On top of that the controls don’t translate properly to 3d. Targeting is incredibly finicky just plain aggravating. There is some degree of auto aim but you have to be close for it to work. Switching targets and getting it so stick nearly caused me to slam my controller in rage. It’s unfortunate that these problems exist as certain levels would have been excellent with more polish such as jumping from ship to ship in Wind Crowrang’s stage.

As a result this is a far more challenging game than any other in the series. The constantly shifting camera leads to plenty of cheap hits and even worse angles where you can’t see the platform you need to jump on with no option to move it. There’s nothing worse than falling to your death because the camera decided to swing mid leap. The game is incredibly stingy with energy capsules to the point where the majority of your healing will come from saving your comrades.

The boss battles are the highlight the game but only if you can exploit their weakness. Otherwise be prepared for a near 10 minute slog as you whittle their long life bars down little by little. While some of these encounters are well designed there are others that rank among the worst boss battles I’ve ever experienced. The Flame Hyenard battle is one giant clusterfuck of mechanics that do not form a cohesive whole and is frustrating beyond measure. Whoever chose the overhead camera angle for the Ride Boarski battle needs to be shot. It’s making me angry that I have to mention some caveat when talking about the game’s good points as I really wanted to like the game but I just can’t.

Visually X7 is inconsistent. The character models are cell shaded and do a good job of replicating the 2d artwork. However the backgrounds are not go for a realistic look that clashes with the cel shading. There are a significant number of cut scenes that are a mix of real-time and cell animation that do a good job of moving the story forward. But once again it is completely ruined by the absolutely terrible voice acting. The acting is poor and there are awkward pauses in every conversation, almost as if the audio was pieced together after the fact. Capcom has never been able to get this aspect of the series right and it is at its worst here.

Mega Man X7 is a game that had its heart in the right place but falls flat in its execution. There are far too many issues for me to recommend it to anyone, leaving it the sole chapter in an otherwise excellent series that needs to be skipped. What a shame.