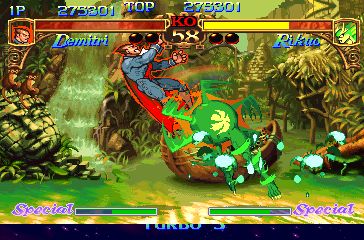 By the mid-90s SNK’s fighting game factory was running at full capacity, with a series to cover a variety of niches. Curiously Capcom did not follow suit and were content to pump out further iterations of Street Fighter. But it was only a matter of time and when they did finally pursue a new IP Darkstalkers was the result. Both visually and gameplay wise Darkstalkers was years ahead of its time and it would take the then new 32-bit consoles to contain its awesomeness. In a strange twist Capcom did not do the honors themselves; Psygnosis, probably Sony’s most important partner in those early years handled the port. Though far from perfect this version of the game is solid and only had the misfortune of coming a few months after the stellar Saturn port of its superior sequel.

Darkstalkers was about the point I realized that no way in hell a decent home port would be possible on my Super Nintendo and Sega Genesis. Now the later Street Fighter Alpha 2, flaws aside, would prove me wrong to an extent but I’m sure no one saw that one coming. As I was only fourteen and knew nothing about memory and animation frames you only needed to see the game in motion to know that it was on a different level than the Street Fighter ports Capcom were cranking out. The PlayStation would be the recipient of the first game and while it isn’t arcade perfect it was close enough to suffice back then.

The cast of Darkstalkers has as much personality as Capcom’s other game and in fact I would go so far as to say even more so. Now granted these are essentially all of the most popular B-movie tropes in one package but you have to give Capcom’s artists credit, they put their own spin on each and own that shit. The werewolf, mummy, vampire, creature from the lagoon, zombie, and Frankenstein are all represented with a few new ones added to fill out the roster. Their personalities are embodied in their animations; Demitri’s arrogant swagger, Bishamon’s murderous rage, even Victor’s exaggerated physiology, it says a lot more about their character than being a racial stereotype ever could. It’s a good thing the cast is so memorable as the story is the usual tournament garbage.

At is core the game is built on the back of Street Fighter as it uses the same six button setup and combo system. However there are a slew of gameplay techniques introduced here that would find their way into subsequent Capcom games. The always controversial air blocking made its debut here as well as dashing and a super gauge. The super meter works differently than you would expect; while every character does have a unique super move it can only be executed within a brief window while the gauge ticks down. Otherwise the meter will only perform an EX version of your normal special moves. I’m not a fan of this setup as It is very restrictive in that you have no choice but to use it as soon as possible lest it go to waste. Chain combos are also present but seem out of place; the combo system is already perfect as is I don’t see why it was necessary. Generally speaking this is much faster paced than even Super Street Fighter 2 Turbo and combined with its cartoony art style has a unique feel all its own.

For whatever reason Psygnosis made the AI ridiculously aggressive and punishing, probably to cover up the fact that as a package the game is feature light. On the default setting the computer is ruthless and will use every opportunity to punish the slightest misstep. Considering the game’s speed and exaggerated animations it’s easy to lose track of just what the hell is going on. While its manageable with long hours of practice there really isn’t any incentive to own the game if you don’t have friends over. You only have an arcade mode and vs mode to tide you over with no bonus content to unlock and in light of other fighting games like Tekken 2 it is extremely lacking.

You can’t talk about Darkstalkers without lavishing praise on the visuals. At the time of its release no other game exhibiting the level of detail put forth in this game’s animation. In fact even today if you study the game you’ll realize just how far ahead of the curve Capcom were back in 1994. They were so far ahead that Morrigan sprite was trotted out up until 2012! Since the cast are not human the artists use plenty of squash and stretch animations to really exaggerate special moves or even simple movements. But at the same time everything remains anatomically correct down to the smallest detail. The game’s backgrounds are gorgeously rendered and accentuate the onscreen action rather than fight for your attention.

The PlayStation port is very well done but like nearly all 2d fighting game conversions it suffers from a loss in animation frames. It isn’t nearly as bad as later games such as X-Men vs. Street Fighter but to those with a trained eye it is noticeable. There are also annoying load times between matches and rounds; a feature that plagued many 32-bit conversions. It was a tough pill to swallow for those of us that grew up on a steady diet of cartridge games with instant access.

All in all this is a solid conversion of a classic game, especially one not handled by Capcom themselves. For a first effort this is really good and would only get better with subsequent releases. At this point though you are probably better off checking out Darkstalkers Resurrection.