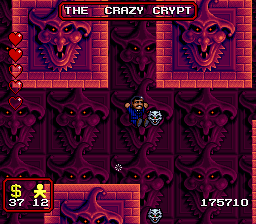 While I have thrown my share of vitriol at Akklaim and LJN for their terrible licensed games I would be remiss if I didn’t get around to Ocean. In many ways Ocean were LJN’s European counterpart as they flooded the market over there with garbage. Thankfully we were spared the vast majority of their output and let me tell you, it was bad. However like the previously mentioned parties occasionally a good game would emerge from their stable. The Addams Family was tie in to the film that brought the characters back into the spotlight and while derivative is actually a pretty good game, especially as the movie doesn’t necessarily lend itself well to a video game.

While it doesn’t necessarily put it front and center the game is based around the film of the same name released in 1991. In the film Abigail Craven launches a plot to steal the Addams’ family riches using an imposter Uncle Fester. Since the game was created in a scant four months it only loosely follows that plot. Abigail has kidnapped the members of the family and hidden them around the estate. As Gomez you must save five members of your family and recover the stolen riches. Given Ocean’s output when it came to licenses the fact that the game is solid considering the accelerated development cycle is a god damn miracle. While it isn’t exceptional it is better than it probably should be.

Gomez moves with a nice little pep in his step and is a very controllable protagonist. His momentum can be an issue at times but the fact that you can stop on a dime and retain full control even when airborne offsets that. Offense wise your main attack is the staple butt bounce. A sword and golf balls occasionally show up but are lost when hit. In my opinion these items should have appeared more frequently given that you are moving in tight spaces so often and butt bouncing isn’t an option.

Although this is a platformer structurally it is a little different. As a squat version of Gomez the entire Addams mansion is available to you from the start. From the Hall of Stairs you have access to every corner of the house as well as a few outdoor areas. While the structure would suggest an adventure along the lines of Metroid it isn’t that. You’ll gain no new abilities or items aside from heart containers along the way and the order you go about rescuing each family member comes down to preference. Some paths are more difficult than others and you might want to stock up on extra lives first.

The level design, aside from the non-linearity, is the game’s greatest strength. Each section of the house is pretty long and broken down into multiple named sections that each seem to focus on a specific idea. Firing fish will challenge you to navigate large gaps using conveniently placed enemies and the projectiles said fish spew. Jester’s Jump is one giant hall that will test your leaping skills as you activate switches to progress to the exit. Some parts drag on but there are a ton of secret and more importantly shortcuts that will warp you around the “map” and cut down on travel. The game can be difficult but at the same time it is extremely generous with extra lives, almost as if the creators knew and were doing you a solid. Death will respawn you a few feet away so even that isn’t a deterrent. For a platformer that isn’t Super Mario World this is a bit long but I feel it ends before it wears out its welcome.

I’m actually surprised at how much work was put in to the visuals considering this is a licensed game. The many different rooms of the house are all visually varied and packed with plenty of detail. The backgrounds are well drawn and can range from the creepy to silly. The scrolling is often three layers deep for that extra visual punch. That being said even in a game that takes place primarily in a mansion they still manage to incorporate some of the platforming staples such as an ice level (the freezer) and the fire stage (firing fish and the furnace). I can’t really knock it for that as nearly every platformer drew from that well but they really stick out here.

While the two games are nearly identical in terms of layout the graphics differ heavily. It is apparent that the game was built for the SNES first as the color choices used tend to blend together perfectly. The Sega version has taken a significant hit in this area with the choices used looking pretty garish. The scrolling backgrounds have been either toned down or outright removed which doesn’t make sense. It really comes across as though it were an afterthought rather than a priority.

Overall the Addams Family is a good game in a crowded genre. It is a bit generic but compared to Ocean’s typical licensed output but that is actually a positive in this case. This isn’t the first platformer that I would reach for to get my fix but it is solid nonetheless.