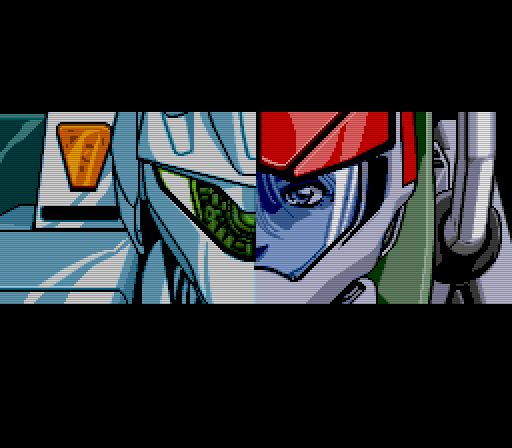 Macross 2036 was one of my first imports when I finally had enough disposable income to indulge my video gaming habit back in the early 2000s. An obscure PC Engine title might seem like an odd choice in light of the innumerable PlayStation games that should have come overseas. But I had just seen Macross Plus on DVD and it reignited my love for the series. While the game itself is solid it does have a few gameplay flaws that make it fall short of its wonderful production values.

The developers went all out on the game’s production as evidenced by the vast number of animated cut scenes in between levels and the fact that they hired original character designer Haruhiko Mikimoto for the project. Set in the period between Macross: Do You Remember Love and Macross II 2036 follows pilot Maria Jenius in her battles against a renegade faction of Zentraedi. The plot advances in between each level in fully voiced cut scenes that stretch for minutes at a time. Sadly it is lost on those of us who don’t speak Japanese but you can at least appreciate the effort spent on what is essentially just another shooter. Outside of its animation this almost comes across as a lost OVA episode of the series rather than just a game.

Visually the game itself is pretty amazing. Like the rest of the game things start out pretty staid and become more spectacular as you progress. The backgrounds feature multiple levels of scrolling and become more daring, such as Mission three’s line scrolling water that features a reflection of your ship on its surface or the all-out war taking place in the background of Mission four. Boss fights often feature large screen filling mechs ripped straight from the series that really add a sense of awe to these battles.

The soundtrack is similarly incredible as it features perfect recreations of the show’s signature tracks, all in red book audio. The music is also dynamic and will adjust to the onscreen action. The game’s measured pace allows plenty of opportunity to build tension or to rally your forces. Even the sound effects pack an audio punch as explosions are incredibly loud if you have suitable speakers.

Where the production values are top class the rest of the package does fall a bit short. Macross does not make the greatest first impression going by its first stage. Armed with nothing but the standard cannon and missiles there is little excitement to be found as you go through the motions. Your only power-ups slightly increase the size and power of your shots. To an extent you could say this is to acclimate you to the games mechanics but there isn’t much to learn outside of boss battles.

The true breadth of the weapons system does not become obvious until the next mission. In between missions your experience grants access to a burgeoning arsenal of weapons that run the gamut of shooter staples with a few unique ones thrown in. Like Super Earth Defense Force you can only choose one and while some are more optimal for certain stages with skill you can make any of them work. All weapons are governed by a power meter that fills with use; at its max they overheat and become unavailable briefly. Each differs in terms of how fast they burn out and recharge with some like the laser having nearly unlimited use. But that is balanced by its lacking power.

While the game features a robust set of weapons overall it is a bit bland. This is as routine a shooter as they come as enemies pour in through their preassigned formations at set intervals with little in between to mix things up. The only seemingly random element would be the occasional fighter jets that rocket by and the game (wisely) telegraphs them in advance. Until the games final few levels there is very little reason to bother using your special weapons as what little opposition you face does not warrant it.

While you can’t freely transform into Battroid mode the game does make the switch during boss battles. Here the controls are different and require some adjustment. Auto fire is permanent with both buttons controlling your rotation as you freely fly about the screen. Once you’ve grown accustomed to the setup it does a fine job of recreating the space battles seen within the anime, albeit within a confined space. My only issue is that the bosses are massive bullet sponges that present little challenge which does kill some of the enjoyment of these segments.

It almost feels as though the games shooting portion is an unnecessary distraction needed to bridge the next extensive cutscene. That isn’t to say the game is bad but it is clear where the majority of the focus was spent. By the midpoint of the game it picks up considerably with more aggressive enemies, more elaborate level design and actually challenging boss battles. It’s just a shame that that amount of care wasn’t lavished on the entire production.

I would rate the difficulty as medium overall. The later weapons trivialize the game a great deal but luckily it’s balanced so that no matter how skilled you are you still won’t have enough experience until close to the end. Death holds little penalty since you keep your basic weapon upgrades and respawn in the same spot.   Despite the limited continues I doubt most will have trouble seeing the climax within an hour or two.

My thoughts about Macross 2036 are all over the place. On the one hand its bland opening stages paint the picture of a middling shooter designed to impress you more with its lavish cinemas than its game play. But midway through there is a spark that elevates it above mediocrity. That unevenness is what is so disappointing. There are better shooters available for the system but that doesn’t mean Macross 2036 is completely worthless; you’ll just have to temper your expectations, especially in light of its asking price.