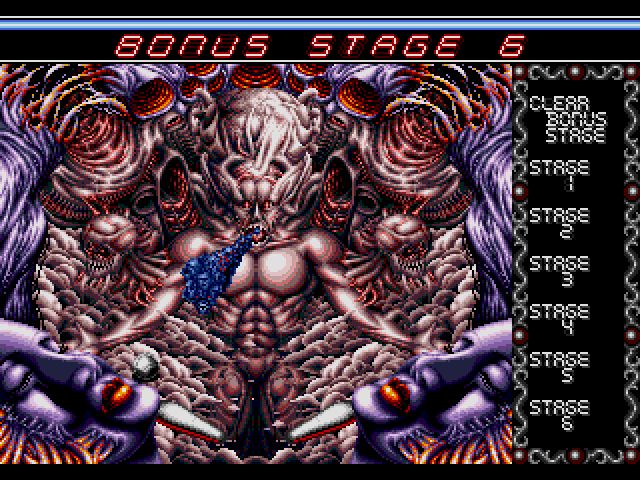 Pinball has never really been my forte. Over the years I’ve dumped a random quarter into any number of licensed pinball arcade units but aside from appreciating the novelty of smacking a ball around and ogling the craftsmanship that went into each table’s construction I’ve never found them engaging. Which is why it is so surprising that I love the Crush series of pinball games so much. Maybe it’s the darker theme of each game and the requisite visual pizazz that goes along with it but I can’t get enough of these games. Dragon’s Fury fulfills a lot of the wasted potential of Devilish and is one of the system’s best games regardless of whether you are a fan of the genre or not.

Dragon’s Fury is a port of the Turbo Grafx-16 game Devil Crush. Why that game of all the titles that could have been ported was chosen I don’t know but I will say that it is an extremely cool game nonetheless. Aside from some light censorship (and a silly name change by US publisher Tengen) Technosoft has done an excellent job of converting everything that made Devil’s Crush so great and even improving it in a number of ways. Pinball games for home consoles were not in ready supply so fans of that particular genre were more or less forced to accept whatever scraps they were given but even taking that into consideration Dragon’s Fury is still one of the best home pinball games of all time.

The medieval fantasy backdrop of the game instantly sets it apart from all other pinball titles and gives the game an incredibly unique look. The macabre theme inhabits every aspect of the game board with skeletons, knights, and evil sorcerers posing as the bumpers and obstacles. The most striking aspect of the table is the female knight, who begins to crumble and subtly transform into a dragon….thing as she takes damage.

This is a more or less straight conversion of the TG-16 game when it comes to the main table but there are differences. The Genesis game is noticeably brighter which clashes with the gothic theme and has less detail but due to the system’s higher standard resolution it has an additional status bar on the right side. Some light censorship has resulted in the pentagrams being altered but in the grand scheme of things is minor. The soundtrack has been recomposed to take advantage of FM synth and is actually pretty damn good. I honestly can’t say which of the two compositions I prefer as they differ wildly. A few extra music tracks culled from Technosoft’s other Sega games are hidden within the game but while they are a cool addition they definitely seem out of place.

Where the presentation was truly overhauled is in the bonus rounds. There’s no comparison here as the Sega bonus rounds have been completely redesigned and boast some truly exquisite art that is breathtaking. These boss battles are the visual highlight of the game as you face off against multi-jointed demons that wouldn’t look out of place in a Treasure game. For all of the trouble you’ll go through to reach the hidden final “stage” it is definitely worth it just to see what can be achieved in a pinball title visually.

Unlike most pinball games the default table is three screens high with the screen scrolling in this version to keep the ball visible at all times. Sonic Spinball tried the same thing but that game is terrible and we shall not speak of it. There are three sets of flippers but you will rarely see the upper level of the table as it is near impossible to get the ball up there. While it is fun to smack the ball around randomly to score points to truly achieve the highest score you’ll have to continually enter the game’s six bonus stages which is a challenge by itself. There are specific criteria to enter each one and it will require a little more ball control than you are used to which I think is actually pretty cool.

This version of the game adapts somewhat of a quest like structure for those that need or want an end goal. Unlike its TG-16 cousin the bonus stages are more than just a cool sub area where you can score a ton of extra points. Beating the boss of each stage will unlock a seventh bonus area that is all new. This final boss is extremely hard and I wish I could say the ending you get for your trouble is worth it but it’s not. This belongs on a top ten list of disappointing endings for the amount of trouble you go through.

But the chances of you ever seeing it are next to nil. This is an extremely difficult game, which sounds kind of stupid and goes without saying considering the random nature of video game pinball. Regardless of what speed you set the ball it will still swing wildly out of your control to the point where the game almost plays itself. It is soul crushing to see a near perfect run end due to chance, and while it is part of the game it still sucks. If beating the six bonus stages proves too hard you can still reach the end game by racking up a score of a billion points or so, good luck with that as even passwords don’t alleviate the significant challenge that lies ahead.

Daunting challenge aside if you’re in the mood to just tool around and see how many points you can get Dragon’s Fury is more than adequate. This is probably the best pinball title for the system and an all-around excellent game to boot.