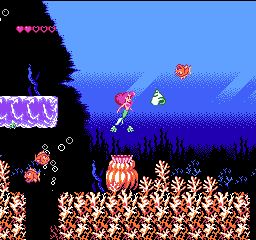 Of all of Capcom’s Disney licensed titles the one you probably hear about the least would be the Little Mermaid. I imagine creating a compelling 8-bit game of the seminal animated film must have been quite the conundrum. With Darkwing Duck they could easily ape their own Mega Man formula and Duck Tales practically wrote itself as the series had such a nice amount of high adventure. But the Little Mermaid? The movie about a mermaid who wants to become human and marry a dude? The standard action platformer wouldn’t fly here. Yet even with that premise Capcom have still managed to create an interesting title that is only let down by its brevity and lack of challenge.

They sure took their sweet time with this one: I remember watching the movie in Middle School back in 1990 and the game wasn’t released until 1992. I wonder why they went with the NES rather than the Super Nintendo? Can you imagine? The plot doesn’t follow the movie in order to better create something unique. Here Ariel has already been transformed into a human but upon hearing that Ursula is wreaking havoc under the sea she returns to the sea to her friends and family.

It’s quite clear that the game is aimed at the younger set with just how easy it is. Enemies do not populate the levels in great numbers although the few that patrol can be dangerous. Life restoring hearts aren’t in great supply because you honestly won’t need them. If you do even a little exploring you’ll build up a stock of extra lives, not that you’ll need them since the game is so short. At just five levels any reasonably skilled player will reach the end in less than 20 minutes, which is perhaps the biggest issue as the core gameplay is so well executed.

Ariel’s only means of attack are the bubbles that come from her tail. These bubbles will trap enemies for a brief time at which point you can carry them around to use as a projectile. More often than not however you’ll use bubbled enemies to find hidden items in the environment. While they start out weak there are two flavors of crystal that will increase their power and range, allowing you to encase even the biggest enemies. Aside from that there are rocks that can be pushed as well as shells to open the myriad treasure chests scattered about. In a way the setup and use of mechanics does remind me of Duck Tales.

Unlike that game however the Little Mermaid does not have the excellent level design that makes full use of your abilities. Most levels are a straight line to the finish with an occasional side area to find treasure and even the occasional excursion onto dry land which are pretty funny to see in motion. Trust me though, these are few in number. There are occasional puzzle elements such as figuring out how to maneuver a rock to open a chest that suggest that the designers were trying to be somewhat ambitious within the confines of the game’s ease of access. If this were longer and had more of these elements it could have been a much stronger title overall.

The presentation has its moments but for a late 1992 release I expected more from Capcom. It starts out pretty great as the Sea of Coral and the Sunken Ship are both insanely detailed and up with there with some of the best on the system. However later levels such as the Undersea Volcano and Sea of Ice feature drab locations that lack the same visual pizazz and also suffer from garish color choices. The sprite work is also ugly which is uncharacteristic of Capcom. Clearly this was not a priority project and while I can understand that it is targeted at kids that doesn’t mean they couldn’t do better.

Difficulty and length issues aside I do really like the Little Mermaid but it fails to live up to its potential. With a few more levels this could have been the perfect game for kids but as it is the game is over far too soon to hold their attention.