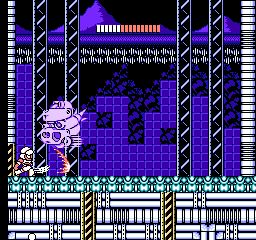 If one were to peruse the unlicensed and pirate game market you’d be surprised at the stuff you’ll find. Usually bootleg games show up long after a hardware manufacturer stops supporting a given platform which is how you end up with stuff like Somari and even an NES version of Final Fantasy 7.   These games 90% of the time originate from numerous Asian countries other than Japan and usually suck. Anyone who perused the shelves at Blockbuster video during the NES era more than likely came across Master Chu and the Drunkard Hu. If you were smart you avoided it but for those who were too curious and wondered how bad could it be, they learned: really bad.

But the rare pirate game turns out truly exceptional and Metal Force is one of those titles. Sporting production values that rival later games on the system and actual gameplay and graphics not ripped from some other title it is a bit of an anomaly but a good one. Metal Force will appeal to action platforming fans of all stripes and the only real negative I can mention is that you can’t readily find a copy of the game online. But that is little deterrent in this day and age as emulation exists.

At first glance Metal Force practically begs to be compared to Mega Man. In actuality however the two games have nothing in common aside from a slightly similar graphical style. There is no stage select, colorful cast of bosses, or even a wide variety of weapons to choose from. What Metal Force does have however is a simple yet solid set of mechanics backed up with excellent level design. In fact I would go so far as to say Metal Force is far better than a large number of the games we consider NES classics now. It’s just too bad it was only released in Korea. That makes no difference though as the few lines of text are all in English anyway.

Your only weapons are a long range wave and a shorter boomerang that will follow you in a weird arc once thrown. Both weapons can be powered up two times although you won’t really notice an immediate difference. It is disappointing that there aren’t more options to play around with but both weapons are extremely powerful and worth using. Short range boomerangs don’t sound too great but the damage they inflict as they come back will save you from many a cheap hit. The wave only suffers in that it fires in a straight line and you’ll often have to be on the same plane as an enemy for it to hit.

The level design is generally excellent, with multiple paths to the end of each of its seven missions. You’ll recognize many of the same pitfalls and hazards from Mega Man such as corridors full of spikes as well as enemies that wouldn’t look out of place in a Capcom title. The game wears its influence well and is far better designed than something like the Krion Conquest. This is a much slower paced romp than the all-out action of Mega Man’s adventures with levels that are about the perfect length. If there is one criticism to make it’s that the game deserved a wider variety of mechanical foes as you’ll see the same five or six recycled throughout.

The difficulty is just about perfect which is surprising considering how few health items you’ll find. Enemies inflict varying amounts of damage yet it always seems fair. Both weapons are amazingly effective considering the difference in their range so it all comes down to a choice in play style. I hate to make the comparison again but like Mega Man checkpoints and health pills are usually placed right after particularly difficult sections of the game. It makes for a game that is very easy for anyone to jump into while still providing a suitable challenge for action platform veterans.

You wouldn’t normally expect it but the boss battles are actually the easiest parts of the game. Each boss has an incredibly simple pattern that anyone will discern in seconds and if you possess even a modicum of skill at video games it is possible to walk away from each unscathed. I can’t really count it as a negative against the game but it was unexpected. I’m used to bosses in these games kicking my teeth in and calling me a pussy for crying; this was a welcome reprieve in that regard.

Metal Force is a great game that easily stands beside the best in the genre on the platform despite its non-existent profile. With great graphics, a good soundtrack and tight controls more unlicensed games should have followed the example this game set rather than being cheap cash-ins. Finding a copy of the game is nearly impossible at this point so more than likely you’ll have to turn to emulation or a reproduction cartridge. No matter how you procure it this is an excellent hidden gem.