Tecmo World Wrestling NES Game Cartridge
Tecmo World Wrestling was released for the NES in 1990. It was developed and published by Tecmo. It became the first game for wrestling to have an announcer for gameplay. The announcer was Tom Talker who was animated, but the announcing was in the form of text bubbles.
The wrestlers in the game will have 20 plus moves for every character and will not have a button dedicated for grappling. There will be instead a grapple that is initiated when two wrestlers walk into one another. From there, the player will use the controller to do combinations on the D-Pad and the buttons to perform various slams and holds. The game also has situational moves like aerial attacks from the top rope and ground attacks the player can perform. On top of that, the game perhaps was one of or the first wrestling game to have action replays. When specific signature moves were performed on the weakened wrestler, there would be a fast cut scene showing the other wrestler perform the signature move, like if it were a television close up replay.
Single player will consist of beating every other wrestler on the roster with the wrestler the player chose. Between the matches, the player will be given the option for training. This training will be exercises that require button mashing, where the player will perform sit ups, squats, or some push ups, having a sumo wrestler sitting on their back. There will be a meter that measures the player’s progress while they are training. Once the meter is filled up, there will be a sphere on top of the meter that will fill up, having seven total spheres. The more a player trains, the stronger their moves will be during a match. When every sphere is filled, the player will not be able to continue training. When a match is lost, a sphere will be lost, but the player can train again to replenish it. When the player defeats all other wrestlers, they will need to defeat the final boss Blue King, who is a non playable character.
Two players in the game will feature gameplay the same as the one player game. Both players will select a wrestler and then go straight into a match. The game will prevent the same wrestling character from being chosen by the players. The main difference between one player and two player is adding the momentum meter on the screen that will swing left or right between the two players. The momentum meter will determine which of the players has the advantage while in a situation of grappling.
The game features ten wrestlers to play as, and one wrestler that is non playable. Akira Dragon, nicknamed The Samurai, has a moveset and likeness based on Antonio Inoki, a real wrestler. El Tigre, nicknamed Striker, who has a moveset and appearance based from Tiger Mask. Pat Gordon, nicknamed Greek Warrior, has a moveset and appearance that is based loosely from Lou Thesz. Rex Beat, nicknamed The British Star, has a persona of heavy metal that will resemble Road Warriors, a tag team from professional wrestling during that time. Jackie Lee, nicknamed Kung Fu Master, is a mixture of Bruce Lee and Jackie Chan. who were two legends from Hong Kong. His moves and appearance will be based from the Japanese/Korean Riki Choshu, a wrestling legend.
Boris Chekov, nicknamed Siberian Machine, resembles Stan Hansen, with his pose closely resembling the hand gesture Hansen does for the Texas Longhorns. Mark Rose, nicknamed Mr Tattoo, resembles a looser appearance of 1980’s Ric Flair, and also Rick Rude. Julio Falcon, nicknamed Iguanaman, Has a resemblance coming from Hulk Hogan, but with a one shoulder singlet instead of a two shoulder singlet, and darker skin. Randy Gomez, nicknamed Flying Grenade, resembles Natural Butch Reed and Harley Race. Dr Guildo, nicknamed The Technician, gets his resemblance from Big Van Vader. The non playable character Blue King, nicknamed Earl of Doom, seems to be based from Junju Hirata, who was a masked wrestler from Japan.
UPC: 0-18946-11008-0
Platform: NES
Players: 1-2
Condition: Used
Genre: Sports
Region: NTSC (North America)
Rating: Everyone 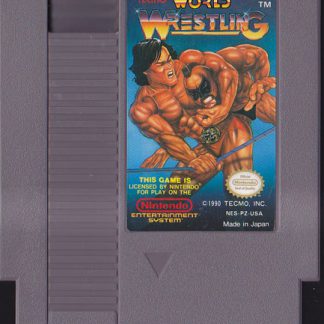