Arkanoid NES Game Cartridge
Arkanoid was released for the NES in 1987. It was developed by Atlus and published by Taito. The game was originally an arcade game released in 1986. Arkanoid was expanded from a previous game series called Breakout. It added power ups, a brick variation, different level layouts, and depth and some visual layering. The title of the game refers to a mothership that is doomed and the Vaus escapes. The game revived the concept of Breakout which resulted in several clones and games that were similar.
The player will take control of the Vaus, which is a vessel that will act as a paddle to prevent a ball from going off the play field and attempt to bounce the ball against bricks. When a ball hits a brick, it will disappear. When the bricks have been destroyed, the player will move to another level with a different brick pattern. The bricks will be in different categories, with ones having to be hit more than once, enemies with flying ships, etc. There are also power ups that will upgrade the Vaus like expanding it, multiplying the balls, equipping a laser, breaking straight to another level, etc. Gameplay will remain the same throughout. At round 36, which is the last stage, there will be a boss called DOH, which is a head that resembles moai. Once getting to this stage, DOH will need to be defeated with whatever lives are left since no continues exist in the entire game.
UPC: 0-20588-01003-1
Platform: NES
Players: 1-2
Condition: Used
Genre: Action and Adventure
Region: NTSC (North America)
Rating: Everyone 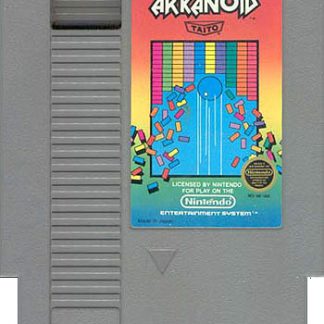