Bo Jackson Baseball NES Game Cartridge
Bo Jackson Baseball was released for the NES in 1990. It was developed by Beam Software and published by Data East. The game has Bo Jackson featured, who was during that time a professional baseball star and former NFL player. The game also has a code to give the player a team of all Bo Jackson players.
Before starting, the player can choose to play a minimum of five innings to a total of nine innings. The player can then choose to play exhibition or playoff, with either one player or two players able to play. While pitching, the player can choose five different pitches and throw them slow, normal, or very fast. There is also a computer vs computer mode and the computer vs computer quick mode that will have a tournament go faster. The purpose of this are seeing the stats in that game and quickly end the tournaments. City names are used in the game but not team names due to not having any licensing from the MLB. The players on the teams are fictional and cannot be modified. Some players will have a name parody of real baseball players like Kenrip was used to parody Cal Ripken’s name.
UPC: 0-13252-00221-0
Platform: NES
Players: 1-2
Condition: Used
Genre: Sports
Region: NTSC (North America)
Rating: Everyone 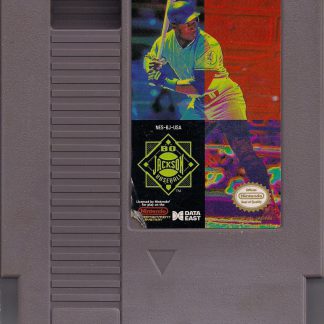