Slalom NES Game Cartridge
Slalom was released for the NES in 1987. Rare developed the game and Nintendo published it. The game originally was released in arcades in 1986. Slalom became the NES’s first game to be developed outside of Japan. The reviews back in the 80’s largely appreciated the animations and graphics.
The game is one player and has the player race in slalom races downhill. There will be 24 total runs downhill that will be evenly spread around three different mountains. Before starting the game, the player will choose a mountain that will be difficulty based. The Snowy Hill will be for beginners, the Steep Peak will be for the intermediate players, then Mount Nasty will be for experts. Every run’s goal is reaching the finish within the given time. The player will need to dodge obstacles that include other skiers, sledders, snowmen, flags, and trees while skiing downhill or they will fall, causing them to lose time. When the player has enough momentum, the obstacles can be jumped over. Skiing around the flags will be necessary to maintain speed. If the player goes around the flag’s wrong side, they will snowplow, causing them to slow down.
The game will also have moguls, or bumps, on the downhill runs. If the player hits one, they will be launched into the air and slightly slow down when landing. When the player is airborne, they will be able to attempt freestyle tricks to earn more points. If a trick is botched, however, the player could tumble and then fall, causing time loss. At every run’s end, the final scores will be calculated that will include the time left from the run and the amount of points that were scored from performing tricks. If a player obtains enough points, the next race may be chosen to be a solo run without the other skiers. The points the player earns during the qualifying runs will convert to extra seconds for the solo timer. High scores for each run will be saved until the power is turned off on the console.
UPC: 0-45496-63030-0
Platform: NES
Players: 1
Condition: Used
Genre: Sports
Region: NTSC (North America)
Rating: Everyone 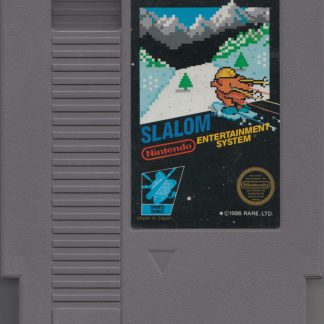