Commando NES Game Cartridge
Commando, which was originally released under the name Senjo no Okami, is a run and gun with vertical scrolling that was published and developed by Capcom. It was released for the NES in 1986 and was an influence in many later shooter games.
Your characters name is Super Joe. The game starts with Joe being dropped into a jungle from a helicopter and needs to fight massive amount of soldiers to get out. He is equipped with a machine gun with unlimited ammo and also has a limited number of grenades. Though Super Joe can shoot any direction he faces, the grenades that he throws only go in one direction, regardless of the way he is looking. The grenades can be thrown to destroy obstacles in the path, and the explosions can kill many enemies if placed well. The screen will stop at the end of each level with a fortress or gate, which have several soldiers running out of. The officer who is giving them orders runs away every time, but you are rewarded bonus points if you are able to shoot him before he disappears. While progressing through the levels, the player can free prisoners that are being transported across the map by the soldier enemies. The NES version also an extremely powerful gun upgrade, along with glasses to let players see all the hidden items
UPC: 0-13388-11001-8
Platform: NES
Players: 1
Condition: Used
Genre: Run and Gun, Adventure
Region: NTSC (North America)
Rating: Everyone 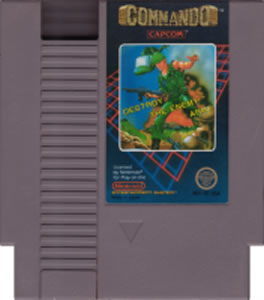